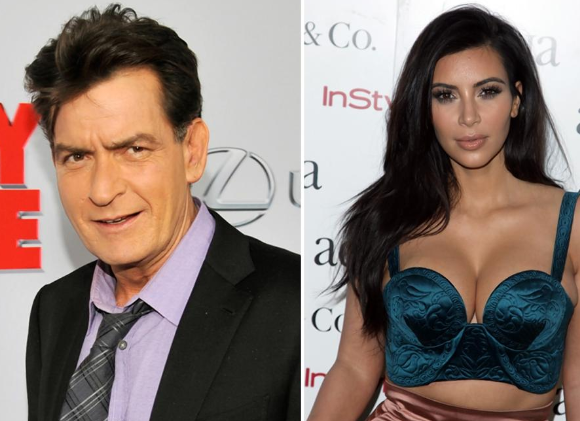 Charlie Sheen Attacks Again, And This Time He’s Going After Kim Kardashian And Her Huge Butt Another day, another Charlie Sheen rant. Twitter rants are the only thing keeping Sheen in the news. And early in the morning on Tuesday, the 49-year-old lunatic attacked Kim Kardashian. He was apparently mad at the 34-year-old reality star because she allegedly refused to sign something for a 6-year-old girl.

We should note that he didn’t actually see this autograph denial take place. It’s just something a friend told him, but just like most gossip sites, Sheen decided to believe his trusted source.

“She cries about it every night before she goes to sleep.” Sheen wrote on his Twitter account, referring to the 6-year-old girl. He then added the three tweets you see down below…

“You are lucky that ANYONE cares about your gross and giggly (sic) bag of funk you dare call an a–.”

“Your public loves u. give something back or go f yourself.”

“My apologies to your hubby, great guy I’m sure, I hope his vision returns one day.”

He deleted the tweets shortly after posting them, but the damage has already been done. Hopefully we will be seeing a Charlie/Kanye fight soon. I’d pay good money to watch them fight.

Honestly, I hate myself a little bit for even reporting this. I am so over this Charlie Sheen sh-t. And why is a 6-year-old girl worshipping Kim Kardashian, anyway? I am glad she didn’t give this girl an autograph. Hopefully she told her to go home and find a more appropriate role model.