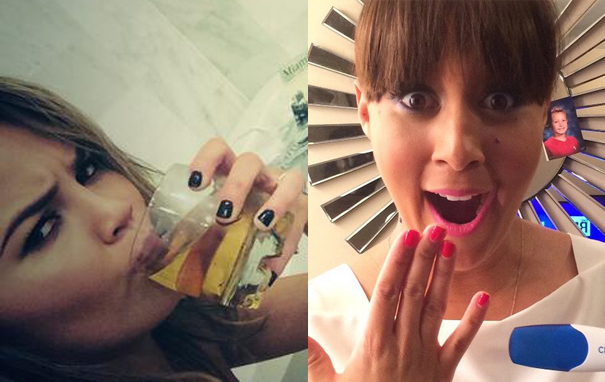 Did you hear the exciting news? Tamera Mowry announced Sunday night that she is expecting baby No. 2 with her husband Adam Housley. She made the announcement on her Instagram account by taking a photo of herself holding her Clearblue pregnancy test. And she made sure that every single one of her followers knew it was a CLEARBLUE pregnancy test.

She captioned the advertisement you see down below with: “We are thrilled to announce we are#ClearblueConfirmed! Can’t wait to meet baby #2! Love Clearblue’s pregnancy test with Smart Countdown. It helped me get through the wait to get my result by counting down with me. #spon.” As you can see, it was more of a Clearblue Instagram commercial than a pregnancy announcement. But still, her followers were nice enough to pretend like they didn’t notice. Instead of focusing on the the shameless plug, everyone congratulated her on the exciting news.

Well, we shouldn’t say everyone. There was one person who just couldn’t keep their mouth shut. Chrissy Teigen posted the following message on her Twitter account shortly after Tamera posted the news on Instagram.

My mouth is still stuck in that position. I went to the park earlier today and people were just throwing bread in my mouth like I was a f–king duck. That was such a beautiful diss. Of course, when you throw that amount of shade at someone, you will receive some hate for it. Damn. Chrissy just needs to end all her tweets with #IDon’tGiveAF–k.