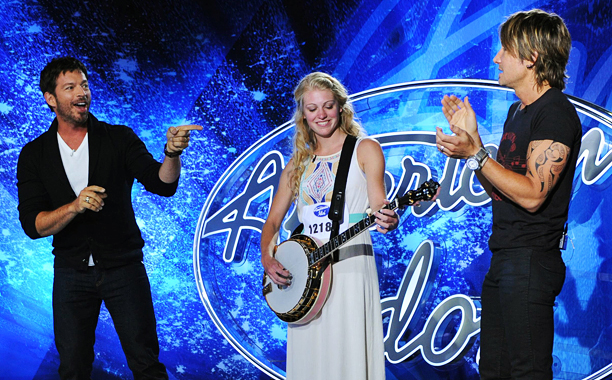 We are now officially in American Idol season. The 14th season of the show premiered last week. You can check out our recap of the special night by clicking this link. Fast forward one week later, and we are now on night three of the auditions, and the Idol bus has stopped in BBQ central, Kansas City.

And since Kansas City is known for their meat, I figured it would be best to focus on the meat and potatoes of this episode. In this post, you will find my top five contestants of the night. The people everyone will be talking about at work tomorrow. People still talk about American Idol at work, right? Honestly, I want to know. I work for home, and my dogs haven’t been interested in the show since Randy left. Ron Wilson (or Big Sexy if you’re JLo) is an accountant from Florida, and for a guy with one of the most boring jobs in the world, he’s actually pretty entertaining. And that big body of his contains several pounds of confidence, but is there a good voice hiding behind all that personality?

The answer is yes!

He showed off his voice as soon as he walked in the door by singing a few lines from JLo’s hit song, Jenny From the Block. After winning her over by singing her song, Big Sexy decided to seduce Jennifer with the classic, Let’s Get It On. The performance made Harry Connick Jr. and Keith Urban a bit uncomfortable, so they decided to leave the room to go eat an imaginary burger in less than 15 seconds. Even though Keith and Harry missed half of his audition, they obviously enjoyed what they did hear. All three judges said yes. Kohlton revealed that he left home when he was just 16-years-old due to “differences with my folks,” and I am willing to bet it had something to do with his terrible name. Kohlton? I don’t blame him for running away. You don’t need that mess in your life, Pascal. After escaping from home, Pascal has spent his time hitchhiking across America. He doesn’t have a house. He sleeps in a tent with his possessions tied to him, and claims he has trouble staying in one place for more than three days.

He shocked the judges with an original song called Sitting Here Beside Me. I am still not sure how I feel about his audition. He’s definitely got an interesting voice, but I don’t know how he’s going to survive in this competition. I don’t see him being thrilled about singing We Didn’t Start the Fire during one of those awkward group performances. Harry expressed those same concerns, saying that this journey will put him outside of his comfort zone. Keith Urban called him ugly and Jennifer Lopez said he was depressing.

But still, they all said yes. We’ll see what happens in Hollywood. There are some people who show up to the auditions wearing boots and a cowboy hat, and you can tell that it’s clearly a gimmick. But with Bushner? It’s clearly a lifestyle. He probably showers with that thing on. I knew Bushner was going to be something special when he announced he would be singing Keith Urban’s Tonight I Wanna Cry, which is probably the best song Keith has ever released. It was recorded back in 2004, when he actually cared about putting out quality music. Don’t get me started on pop country.

Bushner’s voice wasn’t anything special, but at least his audition made you feel something. That’s what I look for in music. Your voice doesn’t have to be perfect. I just want meaningful lyrics and passion. Bushner delivered both. Hopefully he won’t hand his soul over to the devil once he makes it big in Hollywood. Branson native Ellen Petersen might just be the most perfect human on the planet. She can play the banjo, looks like an angel, sings beautifully and knows how to play the Beverly Hillbillies theme. I bet her feet smell like chocolate chip cookies. Did this just get weird? I feel like I made things weird. I’m sorry.

The judges loved her. Harry called her a “pro” and Keith was excited because he feels like “there is so much more in there.” All three judges said yes. When this blue-haired 23-year-old showed up on my television screen armed with an accordion, I immediately checked to make sure my TV wasn’t suffering from Wes Andersonitis. This girl looks like she works at a coffee shop that doesn’t even serve coffee. They just serve the idea of coffee, you know? She did list ‘server’ as her occupation, so it’s certainly a possibility.

As you might expect, Joey has an extremely unique and sweet voice. You know how you hear some people sing, and you’re like, “Damn, I’d make love to that voice!” I didn’t get that feeling with Joey. It was more of a, “Damn, I want to cuddle the sh-t out of this voice. Seriously. Treat this voice right. Play scrabble and snack on some trail mix.” In addition to her lovely voice, she actually played King of Spain really well on her squeezebox. She is one of my favorites. All three judges said yes, but Harry did warn her about being too unusual.