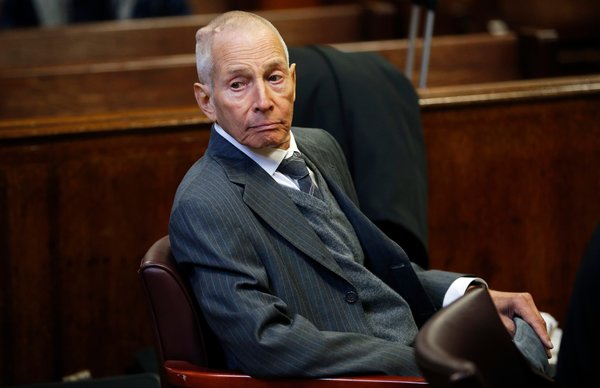 The Dish on the Durst Situation Chances are, if you kill several people and get away with it, it’s probably best to not film a documentary series confessing to all the murders. That’s just was Robert Durst did, and now he’s facing first-degree murder charges.

The life of Robert Durst has been rampant with legal troubles. Durst was born with a silver spoon in his mouth, the son of real estate mogul Seymour Durst. It wasn’t until 1980 when Durst would first get some media attention, though. That was shortly after his first wife Kathleen McCormick, went missing. Kathleen’s case went unsolved for nearly 18 years, when another murder caused it to be reopened.

That occurred when Robert Durst’s long time friend, Susan Berman, was found murdered execution style in her house in California. Police believed that Berman had first hand knowledge of what had happened to Kathleen Durst. Durst was questioned about Berman’s death, though without physical evidence, police were forced to release him without charge.

Then, it got weirder. In order to divert attention from himself, Durst moved to Texas and took up cross-dressing, posing as a mute, elderly woman. Durst might have continued prancing around in those dresses forever, if his neighbor, Morris Blacks’ dismembered body hadn’t been found floating in Galveston Bay.

This time, Durst faced charges and was arrested after a manhunt took police all the way to Pennsylvania. During his 2003 trial, Durst claimed self-defense and was acquitted of the crime.

You figure the guy should have quit while he was ahead.

During his final interview for the miniseries, Durst made a famous sitcom mistake. He forgot to take off his tape recorder when he went to the bathroom. Unfortunately for Durst, it didn’t just record some disgusting potty humor. It recorded him saying one very damning sentence;

What the hell did I do? Killed them all, of course.

The Los Angeles prosecutors only decided to reopen their investigation after Durst agreed to a series of interviews. When the filmmakers went to them with the tapes in hand, it appeared to be enough to charge Durst for the murder of Susan Berman.

Durst was arrested on March 14, 2015, where he’d checked into a hotel in New Orleans. One of his attorneys, Dick DeGuerin, says that his client will plead not guilty in relation to the charges.