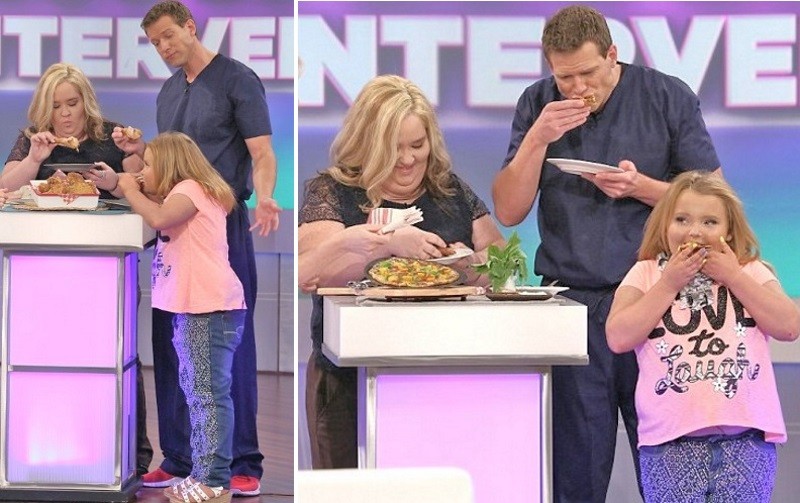 After getting embarrassed on The Doctors while discussing Honey Boo Boo’s poor eating habits, Mama June Shannon reportedly decided it was time to get healthy. She has been photographed working out with a celebrity trainer, and some sources claim she is actually trying out for The Biggest Loser.

However, June’s former almost-brother-in-law, Lee ‘Uncle Poodle’ Thompson, claims Mama June never sticks to her healthy diets. He claims that she’ll lose a few pounds, and then gain them all back the next day.

“She never stays on diets for long; she gains the weight right back. She doesn’t eat in moderation.” He told reporters. According to Thompson, Mama June orders up to 80 nuggets from McDonald’s at one time.

She orders four 20-piece Chicken McNuggets from McDonald’s and eats as many as possible. She’s not healthy and never has been.

Her poor diet doesn’t end with McNuggets. Uncle Poodle also claims she can eat “about three boxes of chocolate-covered donuts in a day.” And all that crappy food is making Mama June sleepy.

She says she is sick all the time. She sleeps all day and stays up all night when she’s not working.

It sounds like she has an addiction, and unfortunately the addiction is spreading to Honey Boo Boo. Thompson says the 9-year-old can eat over 20 McNuggets in one sitting.

It’s encouraging to see Mama June working out with a trainer, but we hope she is doing it for the right reasons. If this is just another attempt to get on television, then it’s not going to be successful.