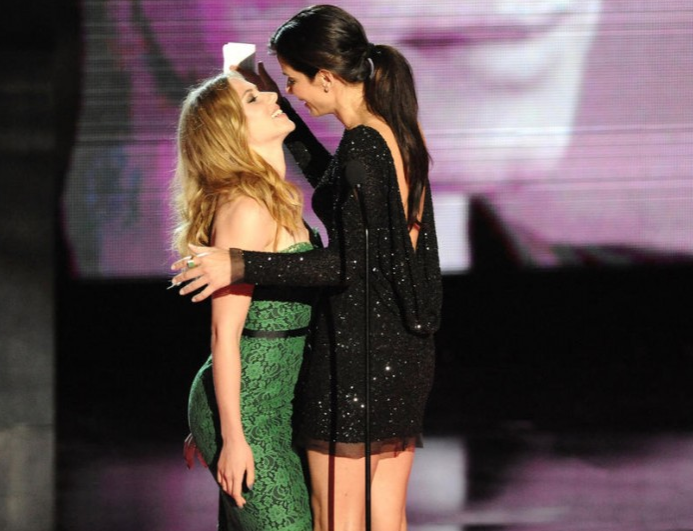 The 5 Most Shocking Onstage Kisses! (VIDEO)

Several years ago, before there were cameras following every single celebrity, the fastest and most effective way to make the headlines was to do something crazy during an award show. And most of the time, something crazy meant locking lips with another random celebrity while on stage.

But not every kiss you see below happened at an award show. Sometimes passion just takes over. For example, check out Jason Segel and Russell Brand’s beautiful make out session at the number 5 spot on the list…

No. 5 – Jason Segel and Russell Brand

During the Stand With Haiti benefit concert back in 2010, Jason and Russell decided standing with Haiti wasn’t enough. We all stand, walk and run for a cause, but how many people kiss and grab ass? Not many, but more people should think about doing it because it got this benefit a lot of attention.

Skip to the end of the video to see the bromantic moment.

No. 4 – Halle Berry and Adrien Brody

“I bet they didn’t tell you that [kiss] was in the gift bag.” That’s what Brody told Berry after he planted an unexpected kiss on the hottest woman in Hollywood. The incident took place at the 75th Academy Awards, and Mr. Brody was obviously feeling unstoppable after winning an Oscar for his performance in The Pianist.

Many people were upset with the actor after the event, saying, “It made me extremely uncomfortable–the same way I’d feel if I saw any other total stranger force a kiss on someone else. What he did goes beyond the realm of polite or impolite. It was abusive.”

No. 3 – Sandra Bullock and Scarlett Johansson

Girl on girl action is always a big deal for the internet, and when Sandra Bullock decided to test out Scarlett Johansson’s lips at the MTV Movie Awards? Well, the people of the internet lost their freaking minds. You see, Sandra and Ryan Reynolds were up for Best Kiss that night, but Reynolds (who was married to Scarlett at the time) couldn’t be there.

And while Bullock accepted her Generation Award, Scarlett filled in for Reynolds on stage. That’s how the magic happened. By the way, Bullock loved every minute of it, “Ryan is right — Scarlett is a great kisser.” She told UsMagazine.

No. 2 – Sacha Baron Cohen and Will Ferrell

Another great kiss from the MTV Movie Awards? Sounds good to me! Cohen and Ferrell went on stage to accept the Best Kiss award for their steamy kissing scene in Talladega Nights.

And instead of putting the audience to sleep with some boring speech, the two comedians decided to continue their scene from the movie. You might want to wait until you’re alone to watch this one.

Of course. You knew this was going to be on the list. It was the kiss that started it all, featuring three of the most popular entertainers in the world at the time.

Do you think Christina was mad at Madonna for kissing Britney first?

If you’re talking about onstage kisses, you have to include this epic (yes I said epic) kiss between Ryan Gosling and Rachel McAdams. It didn’t make the official list because I didn’t really feel like it was shocking.

But it certainly was impressive.