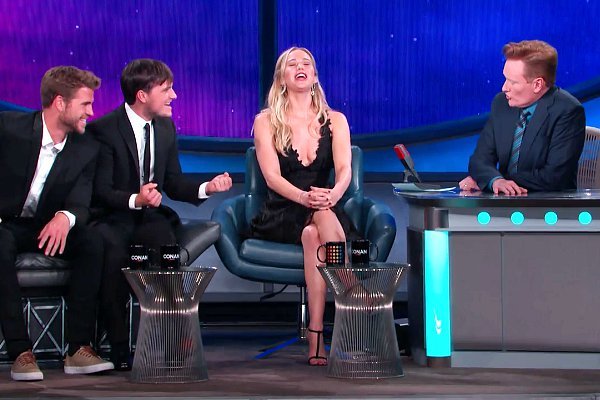 Jennifer Lawrence knows how to have fun, and she had a lot of fun last night with her Hunger Games co-stars Josh Hutcherson and Liam Hemsworth on a special episode of Conan.

For those who don’t know, Conan O’Brien hosted The Hunger Games: Mockingjay — Part 2 panel at San Diego Comic-Con yesterday. During that time, the TBS host must have made a genuine connection with the actress, because when she came on his show after the panel, she was comfortable enough to sing in public.

And Jennifer Lawrence does not like singing in front of people she doesn’t know. She was mortified when her version of The Hanging Tree reached No. 1 on the charts.

“It wasn’t me. Singing in front of people is my biggest fear in the entire world.” Lawrence told Conan. Unfortunately for Lawrence, Liam Hemsworth and Josh Hutcherson were there to call her out, “She likes to sing on occasion.” Hemsworth said. And that’s when Hutcherson stepped in to count her in…

Check out the hilarious moment below…

It actually wasn’t that bad. For a minute there she did start to sound more like Kermit the Frog, but then again Cher and Kermit do kinda sound like each other.

Anyway, if you have some extra time this Friday, check out the bonus video below. Jennifer, Josh, and Liam talk about their most memorable fan encounters.