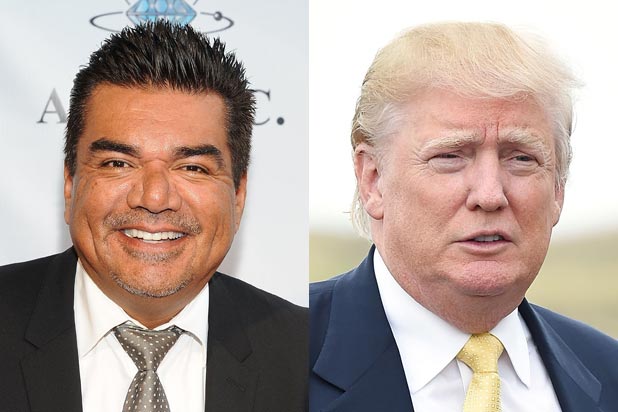 At this point, the only person who likes Donald Trump is the once homeless little person who is now living inside Trump’s hair unannounced. Mr. Trump has angered more people than Comcast customer service. Donald Trump could save a young child from a burning building, and people would be like, “Yeah, but what about the building?”

And during a performance in Arizona, comedian George Lopez made it clear he doesn’t want to see a President Trump. The 54-year-old led his excited audience in a chant of, “F**k that (insert Spanish slur)” directed right at the Trump.

The best part about this video? The racist comments on YouTube. Some of the comments might be people trolling, but 95% of them are from real people who actually support Donald Trump.

“That’s why nobody likes Latinos, you don’t call a guy that…and anyways, if you don’t like it in America, go live in your country than you stupid a**”

“Get out of here illegals. If your illegal with how you got in the country then your probably doing other illegal activities, because you don’t respect immigration laws, do respect rape laws?”

“What Donald Trump said is 100% true. If you are Hispanic and “offended,” I suggest you get off World Star Hip Hop and re watch his speech and look at the big picture.”

“Again they come here to make their money then trash the country with racist rants.”

“What a f**king dumb a**!  Yes.. better with “LEGAL” Latinos, NOT border jumpers which breaks the law.  Come here legally and I have no problem but idiots like Lopez don’t care about laws just racist rants about how great Latinos are. Latinos.. Latinos.. Latinos. How about Americans, Americans, Americans.. Yes, legal Latino Americans are great too! But not the law breaking economic refugees that we all have to pay for.”

Gross. I feel like I need to take a shower now. Is it possible to wash the white out of your skin? Because I’d gladly do it.