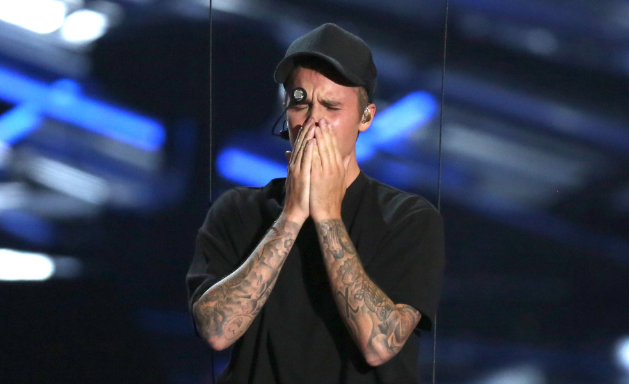 Why Was Justin Bieber Crying At The VMAs? We Have Some Answers For You!

Yesterday we showed you Justin Bieber crying after his performance at the 2015 MTV Video Music Awards. It was obviously a pretty emotional moment for the 21-year-old singer. It wasn’t like he just had one single tear rolling down his smooth cheek.

He was dropping some huge man tears in the Man Tear River. But why was he so emotional? A few people believed it had something to do with Selena Gomez; however, that doesn’t appear to be the case. Sources close to the Biebs claim he was extremely nervous before the show. It’s been several years since he performed at the VMAs, and after all his troubles, he wasn’t sure if the audience would accept him.

He didn’t know how people would accept him. When he saw them on their feet cheering, he was overwhelmed. Last time he was on an award show he was booed. This time he was cheered for. It meant a lot to him.

That’s actually pretty adorable. I’m happy for Bieber. Hopefully he continues to grow up and show he’s capable of being a decent human. I don’t fully trust him yet. It’ll take a few years before I can completely erase this face from my mind…

That was a terrible moment for Justin. It was almost as if Robin Thicke‘s penis took over Bieber’s body and started slapping people in the face. I realize that’s a strange thing to say, but just think about it for a minute. If Robin’s penis could walk, talk and wink, it would probably be exactly like 2014 Bieber.