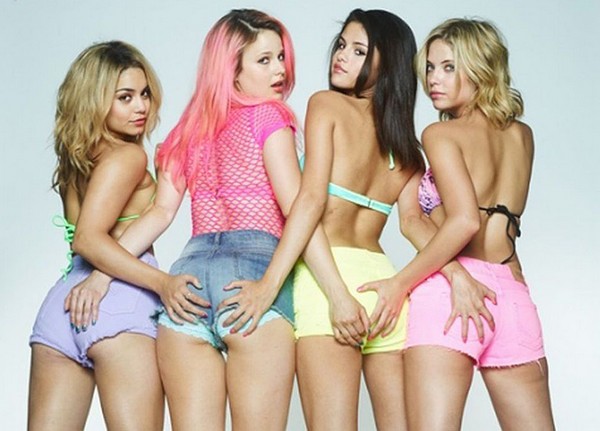 8 Actresses Who Claim They Hate Filming Sex Scenes (And 1 Who Claims They Are Lying!) Sex scenes are usually pretty enjoyable for the audience. We always think, “Damn…I wish I got paid to have pretend sex with that fine piece of a**.” But professional actors usually don’t see it the same way. In fact, some of them claim filming sex scenes is the worst part of the job.

According to one actress who always keeps it real, Mindy Kaling, actors are lying when they tell you they don’t enjoy sex scenes. In her book, Why Not Me?, the actress called out her co-workers, “Obviously onscreen sex is not actual penetrative sex, but, as any religious high schooler will tell you, simulating sex can be pretty damn enjoyable as well.”

She claims actors and actresses don’t tell the truth because they don’t want to make their real life partners jealous.

So what do you think? Are the actresses you see below telling the truth? Do you think they really hate filming sex scenes? Remember those steamy (but not too steamy!) sex scenes from Twilight? Of course you do. Everyone wanted to see Kristen Stewart and Robert Pattinson get their freak on, but apparently Stewart hated filming those scenes.

“On Twilight we had to do the most epic sex scene of all time. It had to be transcendent and otherworldly, inhuman, better sex than you can possibly ever imagine, and we were like, ‘How do we live up to that?’ It was agony. Which sucks, because I wanted it to be so good.“ There are probably thousands of people who would love to film a sex scene with Blake Lively and/or Ben Affleck. And during the crime-drama, The Town, the two stars connected for a brief sex scene. Even though it looked great on the screen, Blake claims it was super awkward because it was her first day on set.

In a special issue of Interview Magazine, the 28-year-old actress had this to say…

“We stand on these red carpets and pose in these dresses, but we’re all only so confident. It doesn’t mean we think we’re great looking or anything. It’s all a facade. But the sex scene was really awkward. It was my first day, so thank you for that.” Whaaat? How could Dakota Johnson dislike sex scenes when she signed up for a movie that featured over 20 minutes of sex? We’re not sure, but the actress claims the whole thing was extremely uncomfortable. She talked with Glamour magazine earlier this year, “The scenes in that room (Red Room) were definitely the most vulnerable scenes in the movie.” She said.

“It’s stressful enough to be tied to a bed naked in a scene. But then they call cut, and you’re still tied to the bed, naked. Jamie would be the first one to throw a blanket over me.”

The adorable Keira Knightley filmed some very naughty scenes for the 2011 drama A Dangerous Method with Michael Fassbender. The scenes were so raunchy and uncomfortable that Knightley and her co-stars had to drink vodka before shooting them.

“We only had one or two shots maximum. It was a vodka shot to calm our nerves and away you go really. Then we had champagne. We drank quite a lot of champagne actually. You can count on Michael to buy a bottle of champagne when one is required. The vodka and champagne is a good combination.” Vanessa Hudgens managed to escape any awkward sex scenes in the High School Musical franchise, but that all changed when she agreed to take on the 2012 film Spring Breakers. She, and her Disney friend Selena Gomez, decided to step out of their comfort zones with this movie.

She talked about her three-way sex scene with James Franco and Ashley Benson, telling Glow magazine, “It was very nerve-racking for me. I told my agent that I never want to do it ever again.”

“We were like, ‘This is gonna be fine, right?’ We were giving ourselves so much anxiety that we were so much more nervous by the time we actually got to set. It was just bad.” Everyone remembers Mila Kunis’ sex scene with Natalie Portman in Black Swan. People couldn’t stop talking about that scene. It was like the most important thing that has ever happened in this world.

But Mila claims all sex scenes, even those with a beautiful woman like Portman, are incredibly uncomfortable…

“It’s hard to have a sex scene, period. It doesn’t matter if it’s a friend, a male, a female. You’re with 100-something crew members, lighting you, repositioning you, there’s no comfort whatsoever.” Shailene Woodley has been involved in a few sex scenes in her career. In fact, she had several in just one movie, White Bird in a Blizzard. And to make things more awkward, her character was losing her virginity in one of the scenes.

The 23-year-old actress told Page Six that it was super awkward, “It’s always an awkward situation when you have to pretend to be intimate with someone that you’re not actually intimate with . . . I think the awkwardness probably lends itself to these great virginity scenes.”

Jake Gyllenhaal and Anne Hathaway were all over each other in the movie Love & Other Drugs. Anne was asked to strip down a few times in the movie, and that wasn’t exactly easy for the actress because she claims she’s not even comfortable in a bikini, “There is that revoltingly embarrassing moment when you have to take your clothes off in front of strangers. I mean, I don’t go to the beach in a bikini for a reason.“

But you know what? She learned to love it. In fact, she actually admitted that she was starting to have some fun with it…

“As with all things in life, the second you stop making it about you and you make it about everyone else, it just got, dare I say, fun.”