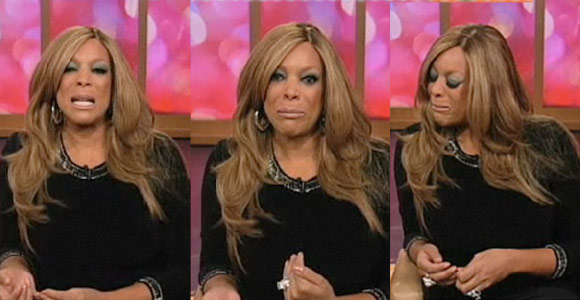 Yikes! Wendy Williams Opens Season 7 By Revealing That Her Son Was Addicted To Synthetic Drugs And Sent to Rehab! Wendy Williams kicked off her latest season with an emotional start. In her “Hot Topics” segment, she was basically getting us all caught up on the going(s) on over the summer when she revealed that her son Kevin Hunter Jr. became hooked on synthetic marijuana.

Despite Wendy’s close, self-proclaimed hands-on parenting, in the back of my mind I picture Kevin Jr. as a spoiled brat. I love Wendy but we know that she doesn’t always practice what she preaches (staying with a cheating husband..etc). I think her heart is always in the right place so she attempts to put her best foot forward in parenting. That being said, when she says she is hands on, I take that with a grain of salt.

HOW DID THIS HAPPEN?

She says that a family member that her son looked up to, introduced the drug to him. She told her studio audience (which she refers to as her co-hosts),

The most important thing that happened this summer, which was a life-changing thing for the Hunter family, is our son was made exposed to synthetic marijuana and he was exposed by a loved one who he looked up to. It’s one of those pens where you don’t see the smoke and you don’t smell anything

WHAT IS SYNTHETIC MARIJUANA?

While I’m no expert, I do have my degree from the Sohk (School of Hard Knocks). Synthetic weed is tricky because it’s not exactly illegal, it’s just dumb, and most teenagers are just that…dumb. However, to their defense as a teenager you are allowed to be a little dumb, the problem is when you are really dumb and smoking spice falls into that category. Synthetic marijuana is sold under a few different names: Spice, Skunk, Moon Rocks. You can actually by this stuff at your local Bodega. If you don’t have a local Bodega then congratulations for not living in the hood, but your child is now probably getting it from the Mayor’s son in his school bathroom. Sometimes it comes in e-cigarette form but the most accessible kind comes in little pouches and looks like potpourri.

The Drug Enforcement Administration (DEA) has tried their best to make some of the ingredients of synthetic marijuana controlled substances thereby making it illegal to buy or possess them. This just causes the manufacturers to substitute those ingredients with others that they “think” are close. There is no testing or FDA regulation because this product is not labeled for consumption; very similar to bath salts. This is the danger; no one knows the long term effects of these on the human brain. Short term you feel just like you feel from smoking weed, however it’s not as clean. It’s the difference from getting drunk off of fine alcohol and getting trashed from drinking Mad Dog 20/20. Arguably weed is natural and much safer if you had to make the choice. People have been known to have adverse reactions to the synthetic drugs exhibiting food poisoning symptoms like vomiting and headaches and there have been some reported hallucinations and even associated heart attacks. Wendy and her hubby had Kevin Jr. taken out the country and placed into rehab. That’s the rich people version of sending your bad-ass kid down south to stay with his grandmother for the summer. She didn’t give details on where but she said that he is doing well now. A very emotional Wendy pleaded with her audience,

To the parents and guardians watching right now, just talk to your kids. This synthetic marijuana, there was only like 2 percent THC in it. The rest was of it was factory manufactured mess. Fortunately, Kevin has two parents who took harness of the thing. We took him out of the country for holistic treatment. We didn’t want to pump him up with psychiatric drugs and all that other kind of mess. I’m glad to say our boy is on the good side of good now.

Wendy is no stranger to addiction. She herself admitted that she was hooked on cocaine for 20 years. She was a functioning addict. At the time of Whitney Houston’s death she explained,

I was a functioning addict. I’d work from 3 in the afternoon until 7 at night, get off and party until 7 in the morning — then sleep until 2, go to the radio station and do it all over again

Although she never went to rehab herself, she knows the ugly downside of addiction. Let’s hope that her son Kevin is really on the “good side of good” like she thinks. You can say what you want about Wendy but she makes a living by dishing the dirt and keeping it real even if it’s about her and her family.

We will have the video of the Hot Topics Segment once Wendy’s Team officially posts it. Like us on Facebook. We will post it there as well.