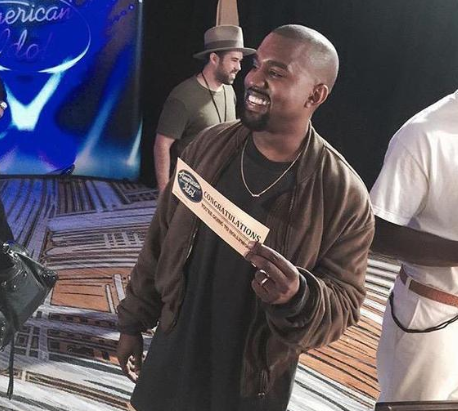 There are always going to be Kanye West haters out there. He’s a celebrity who is not afraid to speak his mind, and unfortunately that makes him an easy target for the haters.

Even when the 38-year-old is doing something fun and goofy, the internet trolls still have to rain on his parade. The superstar rapper surprised the American Idol judges last weekend during the San Francisco audition stop. West was already in town to attend the Democratic National Committee fundraiser, so he figured why not stop by and try out for Idol? Actually, Ryan Seacrest is probably the one who invited him and Kim Kardashian. Seacrest produces Keeping Up with the Kardashians, so he has some special connections. Getting Kanye to make a special appearance on the final season of Idol is a huge win for Seacrest and the gang.

In the short and blurry clip below, you can hear West performing his “Gold Digger” song during the audition. A smart choice considering it features the line, “My psychic told me she have an a** like Serena, Trina, Jennifer Lopez.”

But like we said, people still found a way to hate on this sweet moment. You can take a look at some of the lovely comments we captured from around the web… Man…what the hell? Is Kanye not allowed to have fun? Geez. Leave the dude alone! Just because you don’t agree with him on certain things, doesn’t mean you have to become this negative person who gets off by saying mean and disgusting things about someone who hasn’t really done anything to deserve it.