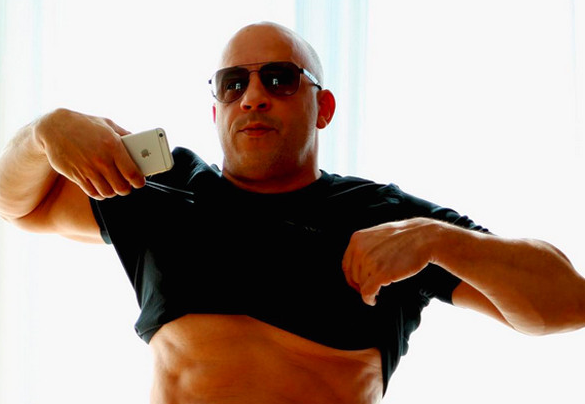 Last week we posted photos taken by the paparazzi showing Vin Diesel rocking a pretty standard dad bod, which is not THAT surprising considering he’s closing in on 50-years-old. However, because he is one of the biggest action stars in Hollywood, you just kinda expect him to always be in shape.

Just in case you missed it, this is the photo that was making everyone question what the heck happened to Mr. Diesel…

A lot of respected websites were posting these photos, and even to this day, no one has come out and proved that there is anything fake about them. So we’re still certain the photo you see above is real. Maybe it’s an unflattering angle, but still, it’s obvious he was in the middle of a dirty bulk.

Now Vin Diesel is ready to fight back. He went on his Instagram to silence the haters. He posted two photos, both of them can be seen below. He also included this caption…

It is amazing the response from the journalists who I have been talking to for the last two days in New York. Today one wanted to see the dad bod. Haha. I am wondering if I should show the picture… Body-shaming is always wrong! What do you think?

He also claimed he would put up an exclusive video on his Facebook page, but so far it doesn’t look like he’s had time to publish it yet. He’s currently an extremely busy man promoting The Last Witch Hunter. One more thing: Vin Diesel is obviously in better shape now; however, he also had a lot of things going for him. He had time to prepare for the photo, he’s obviously flexing and the lighting is better.

But once again, it doesn’t freaking matter. Compared to most people his age, he has nothing to worry about.