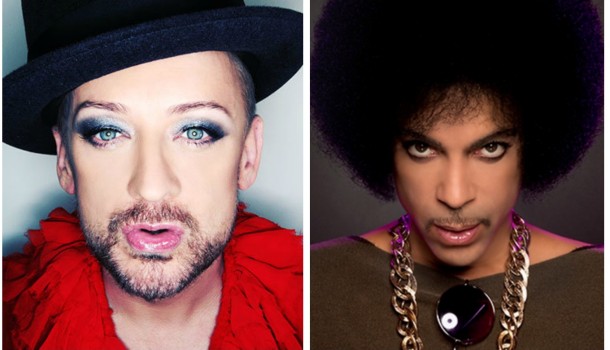 Boy George’s Admission That He Had Relations With Prince Shut Down Taping of The Voice; Everyone Then Starts To Backpedal As Americans, normally we could care less about The Voice UK; that is until this week. We don’t really care who the judges are or what they are necessarily doing or why Boy George has suddenly appeared as one of them. But mention Prince; and now we have a situation. Not Charles, Andrew or Edward…but “The Artist Formerly known as”.

The Voice Uk is just as big a deal as it is here in the US and their judging panel includes: Paloma Faith, Boy George, Ricky Wilson, and Will.i.am. During a taping of the show, which is done in front of a live studio audience, Boy George and Paloma Faith were trying to outdo each other in regards to who they have collaborated with in the past. Boy George claimed that he had sung with the greatest singers in history including Smokey and Luther. George started the one-upping by saying,

Not to be outdone by this 54 year old, Paloma then says,

That’s when Boy George dropped the bomb! He says rather carelessly,

Jaws dropped and the audience went wild. Will.i.am started to give Boy George repeated high fives. The show’s producers reportedly stopped filming, approached the judges podium and spoke with Boy George. It is not clear what they said but he immediately began to start back pedaling.

A source that was in attendance told the media,

After that, Boy George started backtracking saying he hadn’t really slept with Prince and that in reality, he just had his poster on his wall. But as far as the crowd were concerned the cat was already out of the bag.

The producers continued their clean up efforts by talking with People.com stating that it was not serious and production of the show did not really stop after the statement was made. A spokesperson for the show said,

He just went, ‘Oh darling, I’ve slept with him.’ He went on to say that he had Prince posters on his wall as a kid. He was never being serious.”

With the producers hopefully doing enough to prevent any legal action we checked Prince’s Instagram account: PRINCETAGRAM! I figured he would maybe have something to say about the incident but unfortunately for us, all we could find was an old post of Diddy dressed as Prince from Halloween of last year.

In the scheme of things does it really matter? Although Prince has never come out as openly gay, it’s still not that big a deal, but not many things we discuss here aren’t. Is it interesting, funny and good water cooler gossip? Yes! That’s all we care about. If you want to save the world go here. If you want good gossip, humor and entertainment news, then you are right at home.

I think now would be an appropriate time for the Dave Chappelle Prince Skit.  Is there ever a bad time for it? GAME! BLOUSES!! BITCHES!! (I think I threw that last “Bitch” in there)

If you have never seen this before…you can thank me by sharing..