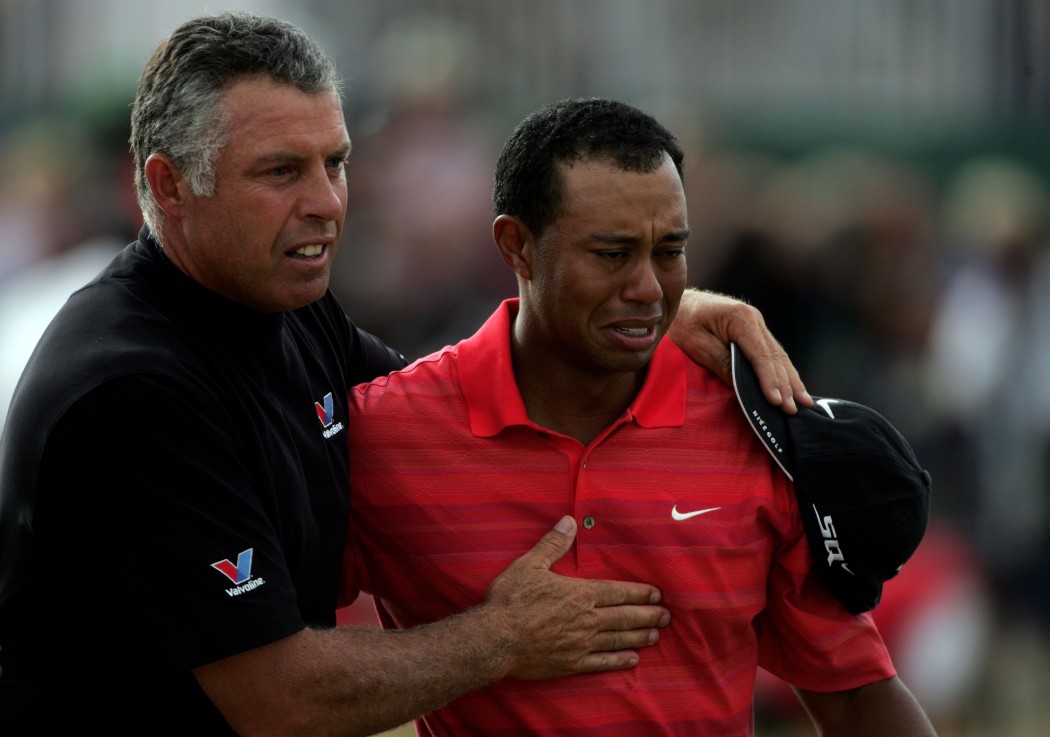 Despicable! A Bed Ridden Tiger Woods is Called Out in a Shocking Tell All Book by Ex-Caddie Steve Williams. We Got Excerpts!

Talk about kicking a man when he’s down. I will preface this post with the fact that I am personally a huge Tiger Woods fan. Not only is Tiger down in golf rankings but he is down and out due to a 2nd major back surgery that cut his 2015 season short.

For those who followed Tiger’s career and knows of his relationship with Steve Williams you also know it’s not all love between the two. In fact, when Williams won his first major event with his new employer Adam Scott, he shocked everyone by making this statement about the victory

Of course he was referring to Tiger Woods. There are not many black asses on the PGA Tour.

That’s when the golf world knew that there was some deep resentment by Williams. I attributed it to that fact that Woods fired Steve, however Williams’ new book entitled, ‘Out of the Rough’ sheds more light on just how frustrated Williams was working for Tiger. A career that Williams would earn a staggering $8.8 million dollars from 1999 – 2011.

Williams takes a self-righteous stand not only regarding Tiger’s sex scandal but also regarding Tiger and the game of golf itself. In one excerpt from the book he writes,

I wanted him to prove to me he could change his behavior and show me – and the game of golf – more respect.

One thing that really p***** me off was how he would flippantly toss a club in the general direction of the bag, expecting me to go over and pick it up.

I felt uneasy about bending down to pick up his discarded club – it was like I was his slave. The other thing that disgusted me was his habit of spitting at the hole if he missed a putt.

Williams also says that during the entire sex scandal, which he insists he knew nothing about, that his family was harassed by the media and Tiger offered him no protection. He says that no one from Tiger’s team would even release a statement declaring that he was an innocent party. In Williams’ words from the book,

People in my local community would front up to me at the shops and call me a liar to my face, and ask ‘what are you doing with him?’ Williams wrote. ‘I repeatedly asked for Tiger’s management to release a statement that would clear me of any involvement in this lurid news.

They simply wouldn’t do it because there were others in his group who knew exactly what was going on and management felt they couldn’t single out one person as innocent.

Only a handful of his oldest buddies actually had any idea this was going on. I didn’t know because Tiger didn’t dare tell me.

We had such a strong bond and working relationship that there was no way he could let me in on what was happening – he knew my values and that I would have zero tolerance for that kind of behavior.

12 Years A Slave: the remake. Only with a white guy and a big paycheck. To me this entire thing is despicable. Williams says that he felt like a slave however he rode the Tiger train until he was fired. He never elected to get off although he could have quit at any time. He caddied for Tiger 13 out of his 14 Major wins and stayed for 12 years. Caddies make anywhere between 8% and 10% of their players earnings to basically pick up, clean their clubs, rake up their mess and carry their equipment. Steve Williams was earning more than some pros on tour for several of those 12 years not to mention being a part of sports history. In fact in those 12 years Williams made more money than most Caddies would their entire careers. On top of that, Williams secured a deal with Valvoline. Williams would remove his tournament caddie bib on the 18th hole of Tiger’s victories and display a Valvoline logo. He got fined for it, but made more on the deal then he had to pay in the fines. There are 124 players on the money list and in 2014 the last player earned $713,377, his caddie received an estimated $50K on top of his base salary which is enough to pay for travel expenses. If a golfer doesn’t make the cut then the caddie doesn’t get anything. So to be on top for that long is rare and quite special, even if it means your boss being upset and throwing a club on the ground while performing on some of the biggest stages in the world.

Steve Williams was one of the best caddies in the history of the game. There is little doubt there. And granted Tiger hasn’t been the best role model, but he has at least earned everything he has received.  Tiger’s been known to have an attitude problem and behave like an entitled brat (like throwing a gum wrapper on the course for Steve to pick up – not cool) but calling him out makes you appear even worse.  To retire and then write a book such as this really provides a good insight to who Williams really is.

It looks like Tiger made one good decision – not trusting Williams with any of his real secrets.