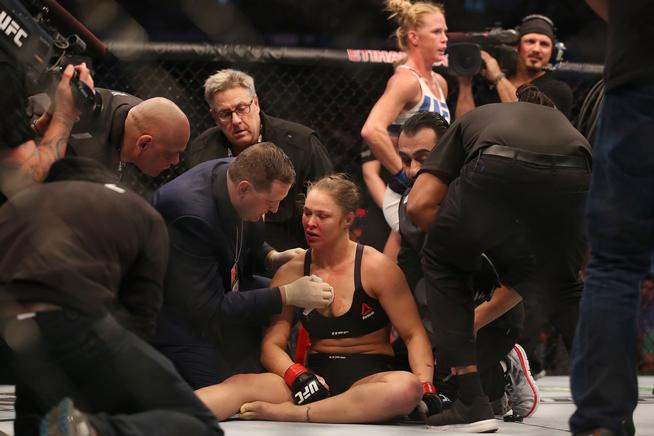 Ronda Rousey Hospitalized After 2nd Round Knock Out. Watch the Devastating Knock Out Sequence and Rematch Announcement. (VIDEO) Ronda had a tough night down under. During UFC 193 which took place in Melbourne, Australia, the 28 year old finally met her match. Holly Holm will be a name we are sure to hear in many conversations over the next week. The 34 year old shocked the world with a devastating knockout that sent Ronda to the canvas. She quickly jumped on Ronda and began to “ground and pound” the superstar athlete until the fight was stopped.

It wasn’t a lucky blow either. The entire 2nd round Ronda was outclassed. She couldn’t land anything, she fumbled around the ring like an amateur. It was pretty embarrassing….especially after all the smack that she talked during the weigh in.  After Ronda gets in Holly’s face, Holly says that she is going to “shake up the world” and that’s exactly what she did.  Here is a clip of that exchange at the weigh in

Hollywood jumped on twitter; most celebrities were in support of Rousey, some congratulated Holly and all were super surprised.

Love @RondaRousey as a person first and a fighter second. She's still my number one. But I think a few of us underestimated Holly.

Congrats @_HOLLYHOLM you just made @UFC history & shocked the world! Much respect to @RondaRousey , you'll be back… #RematchWillBeHuge

After the fight, during he post fight pres conference, Dana White basically confirmed that a rematch would be there if Ronda wanted it.  After a devastating loss like that, who knows if she would even want to fight again.  She wasn’t in attendance during the conference because she was taken to the hospital immediately after the fight.  White also elaborated on her condition

She was transported because she got knocked out. Her lip was split in half and they had to sew her lip.

Here is White answering questions at the conference:

AND NOW FOR THE KNOCK OUT SEQUENCE. WE POSTED A FEW CLIPS BECAUSE THERE IS NO DOUBT THEY WILL BE GETTING REMOVED ALL DAY.