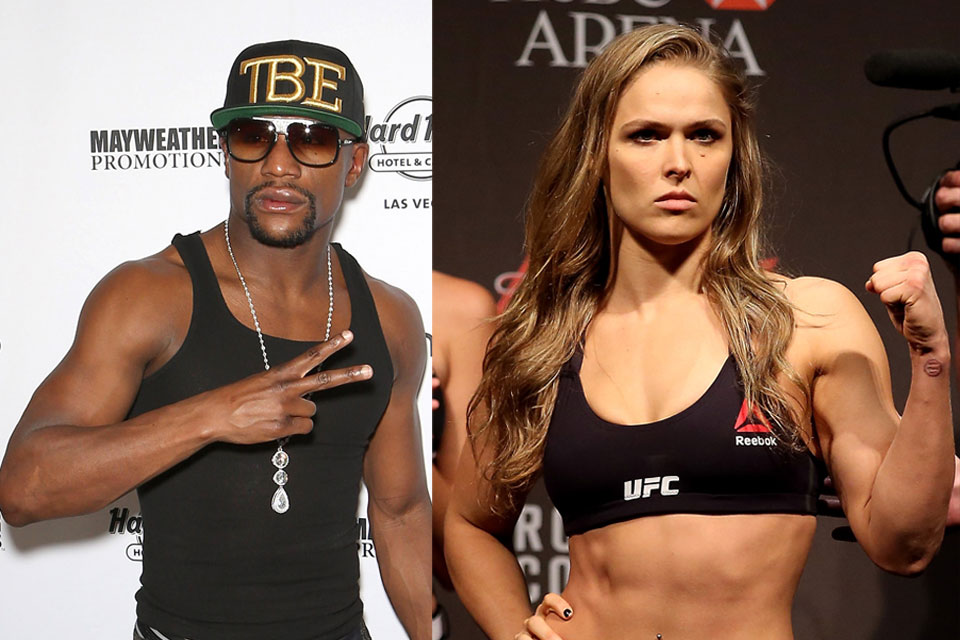 He Said What? Floyd Mayweather’s Shocking Response To Ronda Rousey’s Defeat . Even His Biggest Haters Have to Agree. It’s no secret that there has been an ongoing feud between Ronda and Floyd. Very few people know how it got started but very few people cared. More people have a problem with Floyd then Floyd with people, but because Floyd was often the person with the microphone in front of him, he always appeared to be the one cooking the beef. In this feud, Mayweather struck first, but it was an innocent blow. In fact, Floyd barely swung any verbal jabs at all during their entire media exchange; however this week, he delivered a knock out blow.

Back in July of 2014 during promotion for his fight against Marcos Maidana, Floyd was asked about a fight against Rousey. Floyd’s response was simply,

I don’t even know who he[sic] is

Yes, Floyd referred to Ronda as a “he”. As I mentioned, and you can see from the clip below, I think it was innocent. Rousey waited nearly a year later to respond.  Her comments were at the ESPYS where she beat out Floyd for fighter of the year. Floyd beat her the previous year so Ronda took the opportunity for a cheap shot.  She referenced Floyd and his history of domestic violence,

I can’t help but really say I wonder how Floyd feels being beat by a woman for once.  I’d like to see him pretend not to know who I am now.

At the time it was somewhat cute, but we didn’t know her as the flaming B-tch she has turned into since.  It’s funny, she was in such a dominant position at that time.  Now looking at her 12-1 record it seems ridiculous to compare her with Floyd’s 49-0, but the media had everyone doing it.  Here is Ronda at the ESPYS.

Although Floyd took the high road during this round, his uncle decided to be a little more blunt.  Floyd apologized for not knowing who Ronda was and again seemed pretty innocent in his response.  He then congratulated her on her ESPY win.

However, his Uncle was a lot more forward when asked if Ronda could actually beat Floyd in a fight,

It’s all crap. She’s smaller than Floyd, and not to mention the fact of what a man can do to a woman anyway. I don’t care how tough she is fighting girls. That ain’t got nothing to do with fighting a man. He is too strong for her. Whatever she do, he would break the hold and beat her ass. It’s that simple. And all he gotta do is hit her once and the fight would be over.

Then Floyd got wind of Rousey’s comments on the red carpet and put everything in terms that made $ense.

ROUND 4: Ronda with the low blow

Back in August while walking her dog she was asked by TMZ about Floyd’s comments. This is what she had to say,

I don’t know if you saw the Floyd thing. He said, ‘when you make $300 million in a night, then you can give me a call.’ And I actually did the math, and given the numbers of my last fight, I’m actually the highest paid UFC fighter, and I’m a woman.

I think I actually make two to three times more than he does per second. So when he learns to read and write, he can text me.

AND THE KNOCK OUT GOES TO FLOYD! Needless to say Ronda is still getting heaping helpings of humble pie. Not only did Holly Holm beat her like she stole her brown bag lunch, but Ronda was rude during the weigh-in and refused to touch gloves at the beginning of the fight. Just days later, the now disgraced fighter would not even show her face when she arrived back in the states at LAX. At this point everyone expected Floyd to pile on. Fighthype was actually able to catch the champ for his official comments.

First he denied having anything to do with that meme that 50 cent posted on Instagram.  It’s the photo from Rocky IV, where the clip of Apollo’s trainer is yelling, “Throw the towel, Throw the damn towel”. And Rocky is holding a dying Apollo.  Creed was replaced with a knocked out Rousey. LMAO FLOYD TOLD ME TO POST THIS. He want me to do the dirty work.

Floyd denied speaking to anyone and asking 50 to post that Meme. Then Floyd shocked everyone with some common-sense, support, kind words and encouragement. Here is what he had to say,

That’s not true at all. I haven’t really spoke to anyone about the Ronda Rousey situation, just to set the record straight. I don’t have anything against MMA fighters. It’s just like boxing; you win some, you lose some. A true champion can take a loss and bounce back,”

I don’t think it’s cool how everyone is trolling her on social media. Certain things you have to learn. People will love you on Friday and then Sunday morning, it’s nothing but negative comments and people making jokes and people making fun about you, which I don’t think is cool. I’ve never been on the other side, so I don’t know how it feels. I’m pretty sure she’s a very, very strong person, but we still have to take into consideration that she has feelings. Everything happens for a reason. This was already written. Listen, if God says, ‘In Floyd’s career, I don’t want him to lose,’ you know what? I wasn’t going to lose. That doesn’t mean that I haven’t took a loss before. I’m not talking about boxing; I’m just talking about life. When you lose a loved one, that’s taking a loss. I think that everything is just a learning experience. In due time, she’ll be able to bounce back and make some noise again in mixed martial arts.

So there it is. There is absolutely nothing negative to say about Floyd this time. He took the high road and stayed on it. No backhanded compliments, just pure class. This proves my theory that a lot of his antics from past years was just to sell tickets. No matter how much you hate Floyd, you have to give him his respect here. It’s easy to kick a (wo)man when their down, especially when they insult your ability to read and write. But when you pass up that opportunity and reach down to help them up, than you have my respect. But then again, Floyd always has.