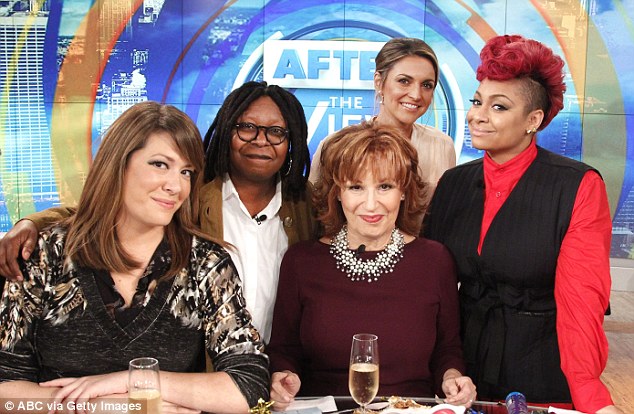 ‘The View’ Will Be Making Cuts Again! This Time It Will Be 2 People and we Got the Scoop! For those who think the View needs to just hang it up, forget it. As I posted months ago, ABC has too much to lose and everything to gain by keeping the show running. However they do recognize that the show needs a desperate overhaul otherwise they will continue to lose advertising dollars, which is the entire reason why any show exists on TV.

Let’s start off by who is rumored to be safe:

Who’s on the chopping block? Raven-Symoné and Michelle Collins are scheduled to be the ones to get the ax. It maybe one or it might be two.  It’s especially sad because I know how much both women like being on the show, but sometimes the vibe is just not right.  I also know that Raven was giving the show the controversial edge that the producers were looking for but she over does it and comes off as way too naive about things she really shouldn’t be naive about. For a woman who is almost 30 (Dec 10), who has traveled the world, and runs in circles of famous people that will make our heads spin, she is poorly informed about anything that matters.  Often she crosses the line of representing young people to making us all look stupid.

Although I like Michelle Collins’, her desperate, self-deprecating shtick is too much ever day, and baked into every comment.  Those would be the two I would look to cut as well.

A source says that when shake ups like this happen, Whoopi starts getting a little antsy. They told The Daily mail,

Things are tense again backstage at The View. Whoopi always starts acting out when the network begins to make changes and has started fussing and cussing backstage even more than she had been all season.

Everyone knows that someone isn’t going to be working on the show any longer come January.

So are there really any truth to the rumors?

You tell me?  I think so.  If you haven’t noticed there has been weird rotations with some different people filling different spots. Here is what the new schedule looks like:

Candace and Paula – 5 days a week

Raven and Michelle – 3 days per week.

They have been swapping in and out Sara Haines from Good Morning America and Sunny Hostin, the legal woman from CNN.  Sunny is an interesting add because she is intelligent, very opinionated and well spoken.  These seem like obvious characteristics for potential co-hosts but you would be surprised.

Sources say that ABC will continue to have Sherri Shepherd as a guest. Reports also say that Padma Lakshmi, Ana Navarro and Molly Sims who are regular contributors are angry that Sara Haines is up for selection over them. All three continue to send their availability over to executive producers which has been and continues to be ignored.

And of course, ABC and the cast never have any comments on rumors surrounding a shake up.  We even asked Whoopi…she said she had to think about it and would get back to us.