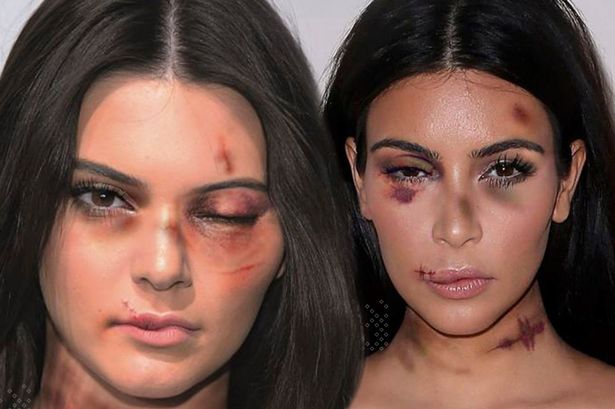 Starting a campaign to end domestic violence is obviously a great thing, but we have to imagine it’s slightly less effective when that campaign is also committing crimes while fighting against other crimes.

You may have seen these photos before with ‘#StopViolenceAgainstWomen‘ attached to them. It’s really a brilliant idea. Getting an artist to make your favorite celebrities look like they have been victims of domestic violence. It makes you feel something, because it’s like, “Hey…I know these people.” And then you start looking around and realizing you have probably been missing warning signs from people close to you.

Activist/artist AleXsandro Palombo is behind the obviously doctored photos. In addition to Kim Kardashian and Kendall Jenner, we also saw photos of Emma Watson, Miley Cyrus and Angelina Jolie. Palombo announced the campaign on Facebook a few weeks ago. You can click on this link to check it out.

After the photos went viral, an interesting story was published on TMZ. Apparently, no one contacted Kim or Kendall before using their images. As you can see below, it looks like Kim’s photo was stolen from the 2014 Paris Valentino Fashion Show. And while Kim and Kendall support the cause, they believe they should have been asked. Their attorneys are trying to contact the artist involved to issue a warning. It’s not clear if the other celebrities approved their faces being used, but we’re assuming they didn’t.

Some people might think the Kardashians are overreacting; however, you have to remember this could have opened the door for ANY campaign had they not responded. Artists could have started using their faces for anti-shingles movements.