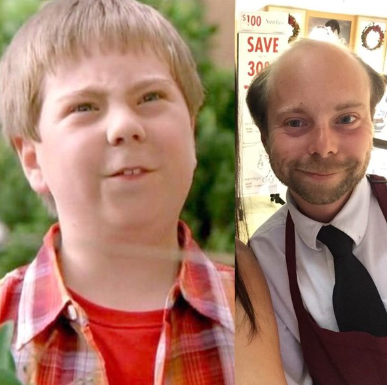 Remember ‘Beans’ From Even Stevens? He’s Now Spreading Holiday Cheer At A Mall In California! (PHOTOS) If you don’t remember Beans from the Disney Channel series Even Stevens, then I probably don’t want to be your friend. He was the most hilarious character on the show.

Basically, if Ron Swanson and Andy Dwyer somehow managed to make history and have a child together, it would probably look and act just like Beans…

Beans was played by actor Steven Anthony Lawrence. Sadly, Lawrence hasn’t had much work since the show ended over 10 years ago. He has landed a few acting jobs, starred in some commercials, but nothing as popular as Even Stevens.

So where can you find the 25-year-old actor now? At the Sunvalley Shopping Center in Concord, California, which is a little over 300 miles away from Hollywood. He’s working there as Santa’s Helper, and several of his fans have stopped by to take photos with him… Cool beans, right? I would freak out as well. According to TMZ, the job pays around $9/hour, but before you start feeling bad for Lawrence, it doesn’t look like he’s doing it for the money.

It might be for research. According to the reports, he will be playing Jingles in the upcoming 2017 comedy movie titled, Holly, Jingles and Clyde 3D. It will be his first role in three years, so he’s probably just making sure he’s at his best.

Earlier this year, Lawrence actually talked with The Huffington Post. He admitted during the interview that he’s surprised people still recognize him.

It’s really weird. I feel like I’ve changed so much when I look in the mirror. I don’t know how people even barely recognize me. But I’ll be walking down the street and people drive by for two seconds and automatically they’ll go, “Oh, my God! You’re Beans! Ahhh!’ God, even I would have to at least do a double-take.