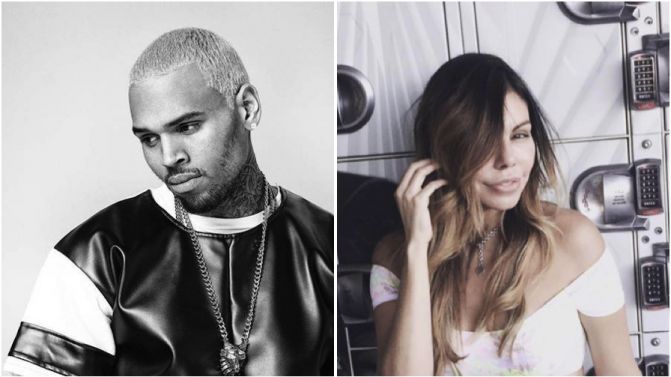 Looks like 2016 is already drama filled for Chris Brown, which means business is looking good for us already this year.

Allegedly, Lizaiane Gutierrez was attending Chris Brown’s private post New Year’s party at his suite at the Palms Hotel in Vegas Friday night. She was able to sneak her cell phone into the party and was stupid enough to use it to take a picture of Chris Brown. Liziane filed a police report stating that after she took the photo, Brown was pissed and began yelling. He then snatched her phone from her and punched her in the right eye.

She even had a picture taken that showed her eye and as you can see it was indeed hit. The cops were called but by the time they arrived to the hotel Saturday afternoon, Chris was ‘gone like the wind’. They don’t call him Breezy for nothing.

This is where the videos come in. First Brown takes to Instagram and creates a post explaining that he is doing things differently for 2016 including cutting off moochers and going after false accusers…as he should.

Keeping my circle small in 2016! I’m done taking the care of grown ass men. And I’m going to be hella rich after all the lawsuits I file from these crazy individuals who keep lying on my name. Happy NEW YEAR! Time for some of us to grow the fuck up!

Keeping my circle small in 2016! I’m done taking the care of grown ass men. And I’m going to be hella rich after all the lawsuits I file from these crazy individuals who keep lying on my name. Happy NEW YEAR! Time for some of us to grow the fuck up!

He then made a video regarding the accusations and in the clip he referred to her as an Old Lookin’ Bitch. He then calls her “Old and Dusty”.

Lizaine is a drama queen so she made a video of her own. She explained how she is getting death threats over this incident and is pleading with Brown fans to leave her son alone.

So what’s the third video? The third video is a clip of Lizaine, getting dissed by Jason Derulo and his entourage. Apparently all her hot friends got to ride with Jason and for whatever reason they leave her standing on the sidewalk. The best part….as the Limo Truck pulls away she gets a text from her friend telling her to call an Uber. This is when we get a glimpse just how annoying she really is….

Typically I’m all for accents and usually the more Brazilian the better.  With Lizaiane Gutierrez, that is not the case. After watching her videos, you get a very good idea of what type of person you are really dealing with. She is an expired Thot, who thinks she’s hotter then she really is. I wouldn’t be surprised if someone at the party saw her take a photo, snatched the phone from her and really did punch her in the face. I just don’t think it was Chris Brown.