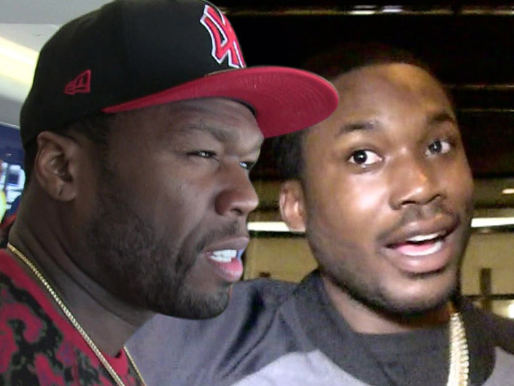 Remember when rappers would end arguments with gun battles on the street? Those days are long gone. Rappers are now using social media to promote their beef. Basically, these strong, grown-ass men are using the same battle techniques as 13-year-old girls.

As some of you may know, the drama between Meek Mill and 50 Cent started when Mill decided to go after Fifty in his new track, “Gave ‘Em Hope.” He called the rapper out for filing bankruptcy, and even dropped a line referring to Vivica A. Fox‘s controversial comments claiming Fifty might be gay.

Obviously, 50 Cent wasn’t going to take this bending over. He went on his Instagram account on Sunday to slam Mr. Mill.

He got the entertainment started by posting the hilarious photo you see below with the caption, “LMAO Hey s—t head, your career is already over. You better focus on getting Nicki [Minaj] pregnant so you can at least get child support girl.” He then posted several more insults, including a parody clip in which he knocks Meek over, and a fresh meme with the message, “When you’ve lost every rap beef you’ve ever been in.” You can check out all the slams by clicking this link to visit Mr. Cent’s Instagram account.

Just hours after the social media murder, Meek Mill came back from the dead to post the photo you see below, which shows him holding his savings account in his arms. He also included a long message. A message that I’m having a little trouble understanding. Basically, I think Meek is trying to say that 50 Cent is broke, lonely, scared, confused and swagless. That’s just rude. How you gonna insult a man’s swag level? You went too far, Mill. That’s a sick thing to say.

Hopefully someone eats this beef before it explodes in the oven. Where DJ Khaled at? He seems to enjoy eating things.