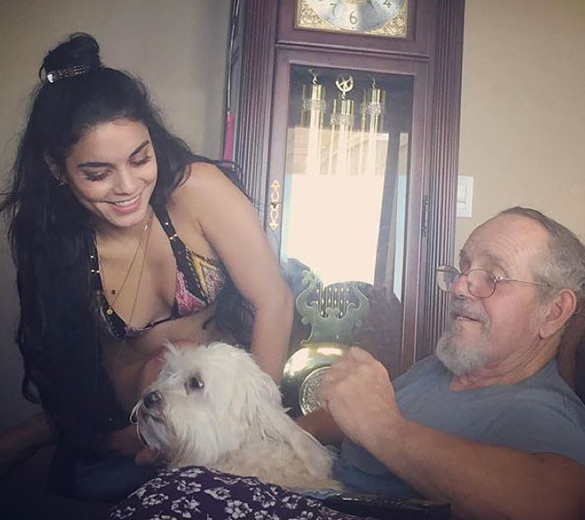 We know we probably say this too much, but this is another great reminder that celebrities don’t have it as easy as you might want to believe. Just one day before the biggest live performance of Vanessa Hudgens‘ career on ‘Grease: Live‘, the actress revealed her 65-year-old father had lost his battle with cancer.

She revealed the news on her Twitter account Sunday morning, “I am so sad to say that last night my daddy, Greg passed away from stage 4 cancer. Thank you to everyone who kept him in your prayers.” She wrote.

And if Vanessa had a normal job, she would have not been working the following day. In fact, most bosses might even give you the entire week off. But Vanessa Hudgens is in show business, and she had been training for this event for months.

If she pulled out at the last minute? It would have been madness on set and her co-stars would have suffered, so she decided to put on a brave face and honor her father, Greg Hudgens, with a performance of a lifetime. It was brave, emotional and completely beautiful.

Several celebrities went on their Twitter accounts to show their support. If you think these people are just being nice because Vanessa just lost her father, you might want to watch the video below.

You will probably change your mind. Vanessa Hudgens has some serious talent. She’s not just that ‘one girl’ from High School Musical. She is THE girl, and her performance last night proved she is here to stay.