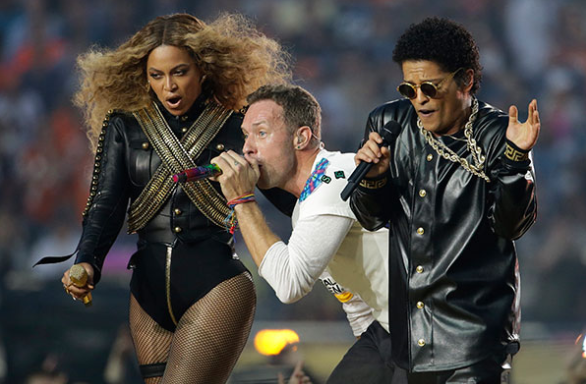 Chris Martin Upstaged By Beyonce During Super Bowl Halftime Show, Watch The Performance And See The Memes Inside! (VIDEO) A little band named Coldplay was supposed to headline the Super Bowl 2016 Halftime show, but it looks like even Coldplay knew their performance would have been terrible had they not recruited some much-needed energy for the show.

This is why Chris Martin made the decision to bring in Bruno Mars and Beyonce. The killer B’s. They murdered their performance, and the internet is making sure Martin knows he was upstaged last night. A lot of people are hating on Martin, but I give him credit for giving the people what they wanted to see. Can you imagine the reaction last night if it was just 15 minutes of him singing depressing songs on the piano? It would have been promoted as the worst halftime show in history. He gave the fans something to get excited about, so honestly I think we should be thanking him.

We should thank him for handing over the keys to Beyonce. She gave us all a wonderful ride last night, and if you missed it…don’t you worry! You can watch the full performance in the video below. Or you can just watch Beyonce and Bruno’s portion. It’s up to you. We have both options for you.

By the way, Jay Z sent Beyonce 10,000 roses ahead of her performance last night. Hopefully she gave one to Martin after the show. We’re sure he needed it.

BRUNO AND BEY ONLY!