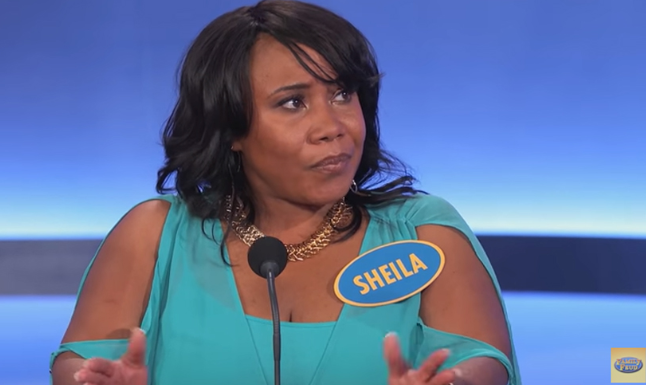 Feeling Bad About Yourself? You MUST Watch This Video Of The Worst ‘Family Feud’ Contestant Ever! (VIDEO) It’s easy to get down on yourself. Maybe your boss yelled at you this morning, or maybe you dropped your banana during breakfast. It doesn’t matter. The point is you are upset and in a bad mood.

That’s about to change. You might be having a difficult day, but at least you can rest easy knowing you aren’t the worst Family Feud contestant in history. Since the show’s premiere back in 1976, there has been a number of terrible contestants and hilarious answers.

But none of them can touch Sheila Patterson. We’re still trying to figure out why her family thought it would be a good idea to invite her on the show.

The question was pretty simple, “Tell me another way people say mother?” But for some reason, Sheila just couldn’t process what was going on. She started repeating answers by adding a Spanish accent to them. It was truly a bizarre moment.

In fact, it was so ridiculous that I was beginning to question if this woman was mentally stable. I’m not even trying to make a joke. I was actually beginning to think there was some monster inside her head slowly eating away at her brain.

Check out the hilarious clip below…

By the way, TMZ talked with Sheila after the video went viral and she admits the stress of being in front of a live audience made her crack.