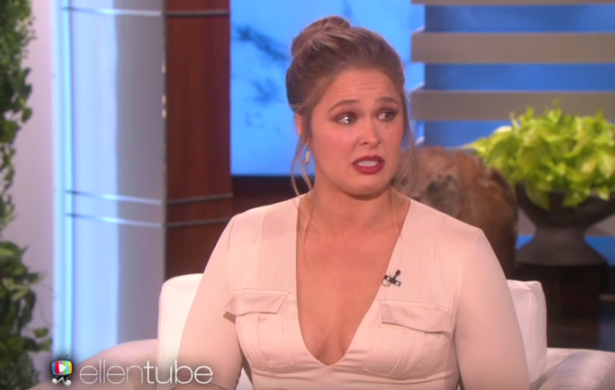 The internet had a wonderful time making fun of Ronda Rousey after her shocking loss to Holly Holm back in November of last year, but it was apparently not a laughing matter for those close to the former UFC champion.

Rousey sat down for an interview with Ellen DeGeneres this week, and Ellen did what she does best, she made Ronda feel comfortable. And when people get comfortable during interviews, that’s when you see those emotional/raw moments happen.

During the interview, the 29-year-old superstar started to cry when she admitted that she thought about killing herself after the loss…

Honestly, my thought I was like, in the medical room and I was down in the corner. I was sitting in the corner like, What am I anymore if I’m not this? And I was literally sitting there and thinking about killing myself. In that exact second, I’m like, ‘I’m nothing. What do I do anymore? No one gives a s— about me anymore without this.’

How did she get herself out of that dark place? Watch the video below to find out. You are going to be surprised by the answer. I’m still shocked by it. Hopefully she was joking a little bit because I feel like she has a lot more to live for than just, well, you’ll see…