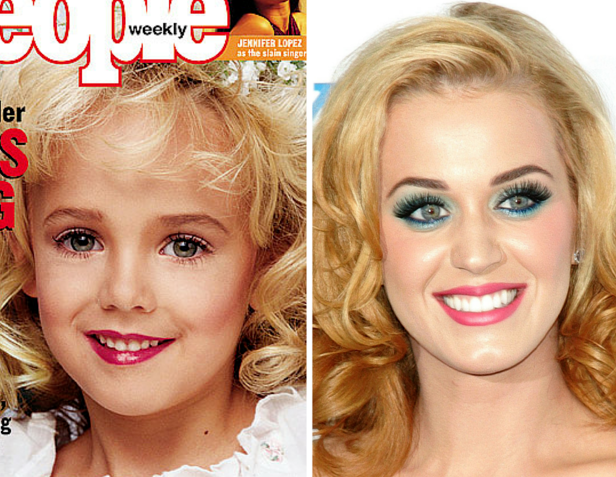 So, Uh…There Are People Who Believe Katy Perry Is JonBenét Ramsey, Check Out The Creepy Videos Inside! If you search long enough, you’ll probably find a conspiracy theory for almost anything, especially if you’re dealing with the entertainment industry, because we all know celebrities work for the Illuminati. They are forced to hand their souls over to the devil before they are allowed to be successful.

And we all know about the most popular theories out there, but have you ever heard that some conspiracy theorists believe Katy Perry is actually JonBenét Ramsey, the child pageant queen who was allegedly murdered back in 1996?

It’s a belief that has been quietly floating around the internet for a few years now, but thanks to this entertaining article from The Kernel, the videos you see below have been getting more attention now.

The first video you see below comes from YouTuber Dave Johnson. He posted the video back in 2014, and it’s believed to be one of the first videos on the subject. In the video, he claims the 1996 murder case was a hoax, “Nobody died, nobody got hurt. That sacrifice was in name only, and that was to get something, and that something was to become a star. JonBenet became Katy Perry, and that’s a fact.”

Do you hear that? IT’S A FACT! This must mean Johnson has some solid proof to back up his claims, right? Maybe a secret confession from Perry herself? Maybe DNA evidence? Nope. None of that. Basically, Katy and Ramsey kinda look alike.

One of the problems with this is that Perry was born in 1984, so she would have been 12-years-old when Ramsey (who was only 6-years-old) was murdered in 1996. Of course, if they’re willing to stage a murder, then they would also be willing to make up some fake birth date as well.

The video also points out that Katy’s parents kinda look like Ramsey’s parents, which means they must be the same people!

Check out the madness below. The second video is from YouTuber Jungle Surfer, and Mr. Surfer points out that Perry and Ramsey have similar eyebrows. Seriously. Those things don’t change, man! Oh, and there is one more thing that makes it pretty obvious that Perry truly is Ramsey.

In an interview a few years ago, Perry dropped this suspicious line, “Not that I was one of those stage kids. There was no JonBenét Ramsey inside of me waiting to burst out.” WAKE UP PEOPLE! SHE’S TRYING TO TELL YOU THE TRUTH!