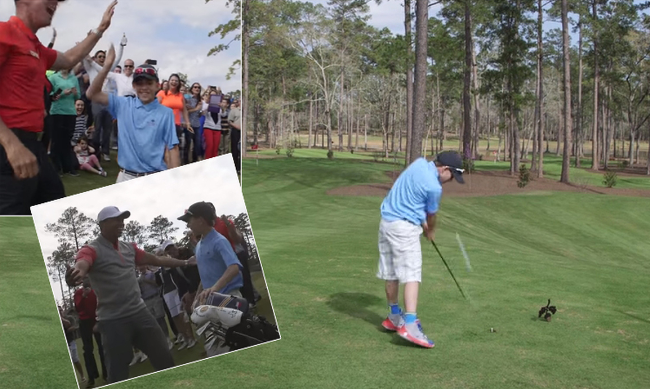 There are some moments you just never forget in life. We all have them, but an 11-year-old boy from Corpus Christi might have one of the best unforgettable moments ever.

Golf legend Tiger Woods has been off the PGA Tour for months now as he tries to recover from back operations. In December, Woods admitted he was limited to just 10-minute walks on the beach before he was forced to return home and rest.

It’s been a painful and long journey for the 40-year-old, but he hasn’t just been sitting inside his house watching The Price Is Right all day. On Wednesday, he was at the opening of The Playgrounds at Bluejack National, a special course for kids, which he helped design.

And 11-year-old South Texas PGA Junior Taylor Crozier had the privilege of taking the inaugural shot. As you can see by the special video below, he did not let the opportunity go to waste…

What an incredible moment, right? Celebrating a hole-in-one with one of the greatest golfers to ever play the game? It’s safe to say Taylor will probably have trouble sleeping for a few weeks. How does one come down after such a brilliant high?

Also, props to Woods for making the moment so special. It was great seeing such genuine excitement.