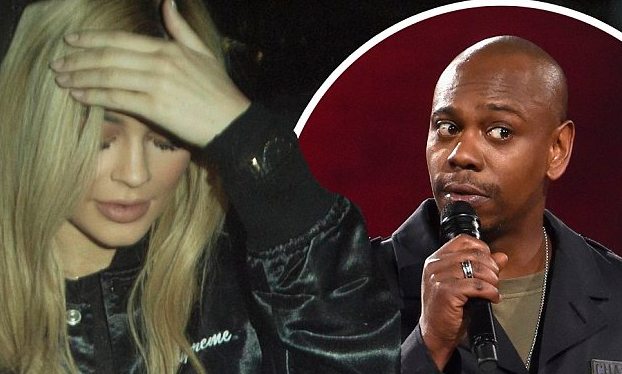 Kylie Jenner And Tyga Went To A Dave Chappelle Show, But Only One Of Them Was Laughing When The Caitlyn Jenner Jokes Started Going to a comedy show is like going to Thanksgiving dinner with the in-laws. People are going to say some sh-t that offends you, defending yourself is not an option unless you’re willing to get destroyed, and you quickly find that alcohol makes everything better.

Unfortunately for Kylie Jenner, she’s only 18-years-old, so she was forced to watch Dave Chappelle roast Caitlyn Jenner while being completely sober. According to the lucky ass people who attended the comedian’s sold-out show in Hollywood, Chappelle freaking rocked the place. He was killin’ it, bringing it back to life, and then killin’ it again.

And during his set, he spent at least 7 minutes talking about how Bruce Jenner transformed into Caitlyn. Telling the crowd he was old enough to remember when Bruce was “Superman” because he was “beating Africans” in track and field.

The biggest laugh came when he talked about a run-in he had with Kanye West before the shocking change was announced: “I said, Kanye…why the long face? And Kanye replied, ‘Man, you’ll see.'”

Which might not sound that hilarious in text form, but if you read it in Chappelle’s voice, it becomes 10x funnier. Even Tyga thought the Caitlyn jokes were hilarious. Sources inside the show say he was laughing. The only person who wasn’t laughing was Kylie. She managed to keep a straight face. Not even a smile during the Caitlyn jokes.

What did she expect though? It’s a freaking comedy show. Her reaction reminds me of the comedy video that went viral this past weekend. If you haven’t watched it, you can check it out below. Basically, it’s another one of those “Heckler gets destroyed” moments, but for some reason this one is super satisfying.