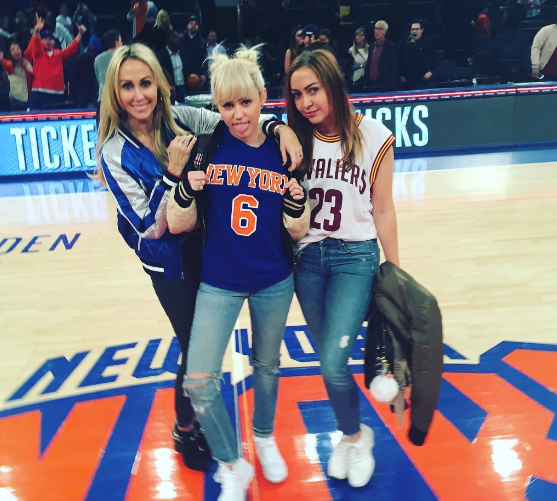 Miley Cyrus Has Wild Night At New York Knicks Game, Find Out Why She Was “Embarrassed” During The Game! After reuniting and getting “re-engaged” to Liam Hemsworth, Miley Cyrus has been staying out of the spotlight for the most part. In fact, a few sources told Us Weekly that she had been spending most of her time at Liam’s Malibu home, where she “has been cooking and cleaning for Liam.”

Although, we’re not sure how much you should trust those sources. They don’t seem to know the difference between being a wife and being a maid.

In any event, Miley managed to sneak out of the kitchen and attend a New York Knicks game on Saturday night. She was there with her mother Tish and her sister Brandi. As you can see from the photos, Miley was rocking a Knicks shirt, most likely because she has been in New York filming a TV series for Amazon.

You don’t want to piss off the locals by rooting against them! Also, check out that balla’ engagement ring on her finger… So what about Miley getting embarrassed? WHAT HAPPENED? Calm down. We’re going to tell you right now.

During the game, her face was blasted all over the Jumbotron. She captioned the photo, “Embarrassed of all embarrassed.” It’s just too bad they didn’t put her and Brandi on the kiss cam. That would have been totally hot. I mean, sick and disturbing. Totally. Gross. Yuck. Gag me with a spoon.

Anyway, Miley Cyrus has an exciting year coming up. Not only is she starring in Woody Allen’s Amazon TV series, but she’s also going to be a coach on The Voice with Alicia Keys. They will be taking over for Gwen Stefani and Pharrell.