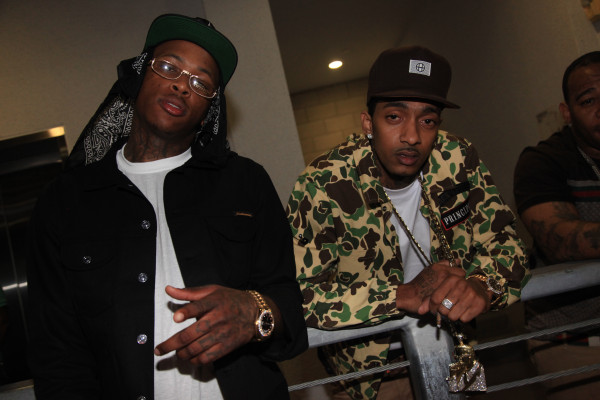 Cops recently shut down a video being made by rappers YG and Nipsey Hussle for their new single “F**k Donald Trump!” The music video was gaining a lot of attention, with about 100 people behind the rappers, chanting “F**k Donald Trump” as the duo shot the video in LA on Sunday.

Police were apparently uncomfortable with the crowd and showed up in full riot gear to disperse it. Reportedly, the LAPD had no idea it was a music shoot at all. The biggest concern seemed to be the cars driving up and down the street to watch, and not the chanting crowd itself.

Nipsey defended the song in a recent interview;

I always heard over the last couple of years that [Donald Trump’s] been foreshadowing that he’s going to run. Like I said in the song, I thought it was a joke. I always knew he was a big celebrity but I didn’t know it was possible for him to become the president. When you think about the 2016 election, all you really hear is Trump. You know Hillary, you know Bernie Sanders, but it seems like [Trump’s] name and voice is louder than the rest of them so it was like are we actually taking this serious? Are people really taking this dude as a legitimate presidential candidate?

It doesn’t look like they’ll be any major repercussions for Sunday’s event, though I am curious as to see Trump’s Twitter feed after he gets to hear YG and Nipsey’s new song.