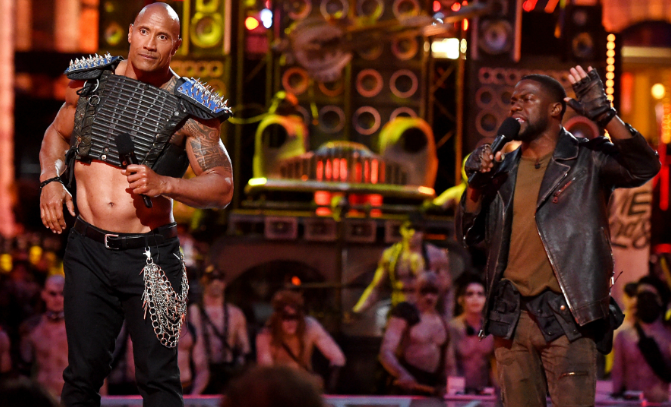 You thought we were done with awards season? Not quite. Technically, the film awards season does end in February, but it’d probably be a stretch to consider the MTV Movie Awards a true award show. It’d be like calling what I am doing right now real journalism. It’s just not.

But the MTV Movie Awards are always a lot of fun, and thanks to your hosts Dwayne “The Rock” Johnson and Kevin Hart, the show this year was crazier than ever.

They made one of the best entrances ever Mad Max-style, and let’s just say Hart got REALLY into his character. Check out the video at the bottom of this page.

And since this is MTV, they were allowed to get a little dirty during their monologue, but their most outrageous moment was their rap titled, “Leo Got F–ked By A Bear.”

At some point during the madness, Rebel Wilson joined in and started humping a stuffed bear. It was the most perfect beautiful mess you’ll ever see. You can watch all the madness down below.

This is why we love/hate MTV. They are not afraid to “go big,” even if that means most of the time they will fail miserably. They’re always trying to entertain us, and for that we thank them. Enjoy the videos, and never forget where you were when Leo got f–ked by a bear.