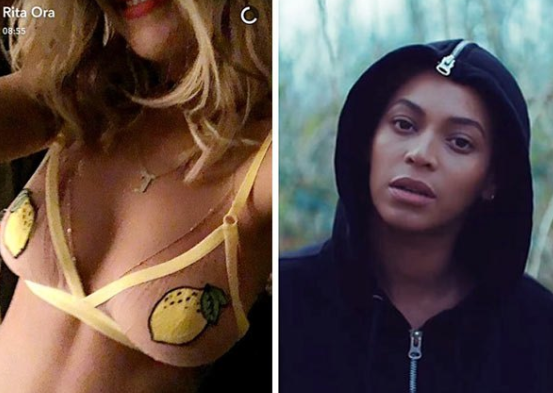 Rita Ora Shuts Down The Haters And Proves She’s Not ‘Becky’ By Snapping Selfie With Beyonce! (PHOTO) Well, well, well. When Rita Ora posted that Instagram photo of her wearing the lemon top and the “J” necklace on the night of Beyonce’s Lemonade premiere, it appears she truly was just being supportive.

Some Beyonce fans jumped on the 25-year-old and accused her of being “Becky with the good hair,” but she immediately denied the rumors on her Twitter account, “I never usually address tabloid gossip but let me be clear, these rumours are false,” she told her fans.

Most of her true fans believed her, but there was still a lot of people out there who needed more proof. After all, we know Rita and Jay Z spent a lot of time together during the early days of her career, so it’s certainly possible that a little late night recording session turned into something more.

But that’s obviously not the case. How can we be so sure? Because Rita Ora snapped a selfie with Beyonce inside the Metropolitan Museum of Art in New York City on Monday and shared it with her followers on social media. Adorable, right? I don’t think Beyonce would be smiling like that if Becky with the good hair was rubbing shoulders with her.

So yeah, that selfie should end the Rita Ora hate. It looks like fashion designer Rachel Roy is still the number one candidate. She continues to deny that she is Becky, and even issued a lengthy statement on the matter after “haters” flooded her social media accounts with personal attacks.

There is no validity to the idea that the song references me personally. There is no truth to the rumors. Consequently, online haters have targeted me and my daughters in a hurtful and scary manner, including physical threats.

In any event, Beyonce was riding solo at the 2016 Met Gala. Husband Jay Z did not join her on the red carpet; however, sources insist there is no drama. They say “he’s done it before,” so he didn’t see any reason to go this year.

Maybe he’s just having flashbacks to 2014 when Solange beat his a** at an afterparty.