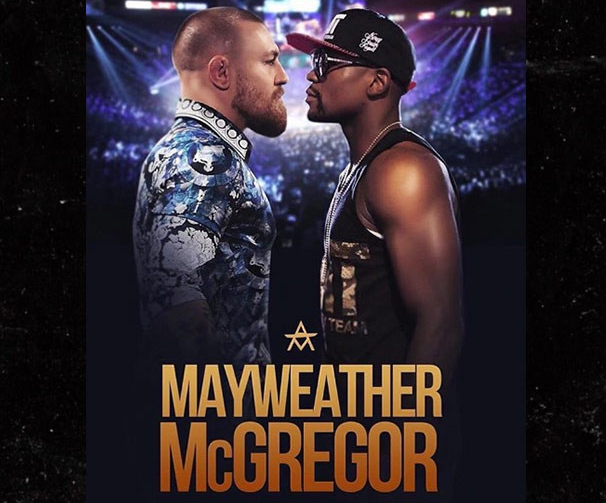 Get your popcorn ready. The biggest fight in history might actually happen: Conor McGregor vs. Floyd Mayweather. As all of you know, there has been a lot of drama following both stars lately. McGregor is currently in a battle with the UFC over promotional duties. He was pulled from UFC 200, and has spent most of his time blasting the UFC on his social media accounts.

But this past weekend, his attention turned toward retired boxer Floyd Mayweather. It all started when Mayweather’s father made comments about his son possibly facing McGregor. And at the time, no one really believed the rumors.

That’s changing though. All parties involved have now commented on the potential match. Mayweather himself said it was “possible,” and McGregor got everyone fired up by posting the photo you see below to his Twitter account.

He captioned the photo: MMA Vs Boxing. Of course, you can’t trust anything McGregor posts online. He is the greatest troll in the history of sports. But it’s important to remember that he’s not the only one talking about this. Mayweather’s camp is pushing this event hard.

Even Joe Rogan is talking about the potential match. He admits a fight would be difficult because of the UFC’s outrageous contracts. They lock up their athletes like animals at a zoo, and they’re typically against co-promotion; however, Rogan says a match is possible if there is enough money involved.

You might say, look the amount of money that you can make with the Mayweather fight is off the charts. Off the charts. You’re talking about a three million PPV buy or something crazy. So you do that, you move that up, you take that chance, and he gets boxed up by Mayweather and maybe he survives.

Rogan’s thinking is that if McGregor loses to Mayweather, it wouldn’t damage his value as much as another loss to Nate Diaz would. The UFC might be battling with Conor right now, but at the end of the day, it’s all about the money. And this might be the best move for them, because everyone expects Conor to lose in a boxing match against Mayweather.

It doesn’t matter if he loses, and that’s the beauty of it. As for Mayweather? Well, he doesn’t care who steps inside the ring with him. He just wants to get paid.

Every time I go out there and compete, my number is, of course, $100 million or better. I feel I can demand that.

If you want to hear Rogan’s full discussion on the fight, check out the video below. The talk starts at around the 2:02:22 mark.