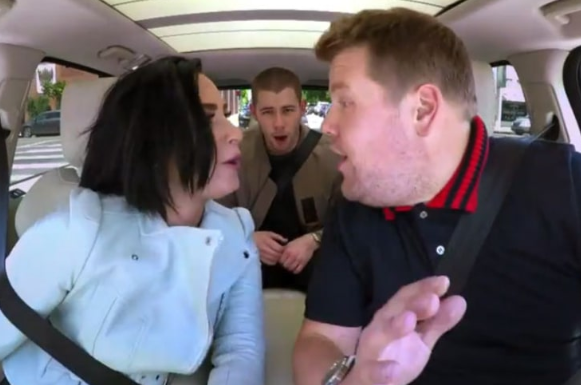 Geez. James Corden and his crew are pumping out these carpool karaoke videos faster than Kardashian butt selfies. Earlier this month he managed to get Gwen Stefani, Julia Roberts AND George Clooney inside the same car. It’s pretty incredible if you think about it. There was a lot of money inside that vehicle.

And now, just two weeks later, Corden has returned with two more huge stars: Nick Jonas & Demi Lovato. It makes sense that the two singers would appear together considering they are going on a huge tour together this summer. The ‘Future Now’ tour begins on June 29, 2016 and ends on September 17, 2016, in California.

So now that the official business is out of the way, let’s get to the fun stuff. Both Demi and James wanted to talk about Nick’s love life. Demi broke down his relationship history for James by explaining, “It was Miley [Cyrus], then Selena, then back with Miley.”

And this goes on for a minute or two before Nick gets surprisingly honest and talks about his purity ring, “I had a real relationship with an adult, and I fell in love actually, and I decided it was time to take the purity ring off.”

Check out the full video below!!! (as always, we didn’t spoil the best parts for you)