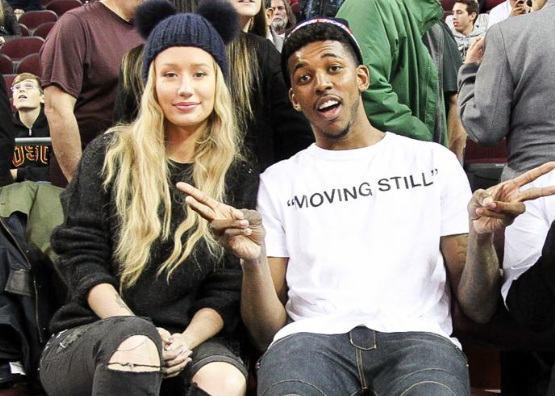 The gossip world was shocked when Iggy Azalea announced she was still planning on marrying her fiancé Nick Young, even after he seemingly admitted to cheating on her with a 19-year-old girl. Iggy never seemed like the type who would stick around and let herself get played by a man, but it looks like that is happening.

Last we heard, the couple was working to strengthen their relationship and the wedding was still on. Last month, the 25-year-old rapper told her fans on Twitter that she wanted a little privacy, “For the record, I haven’t broken up with Nick. We are together and I would love to be given a little (a lot) of privacy on the matter.”

And for a month, she got the privacy she wanted. There weren’t a lot of stories about their relationship floating around; however, that has changed thanks to the suspicious photos you see below. It’s hard to tell exactly what was going on in these photos, but it certainly doesn’t look good. Nick appears to be flirting hard with a gorgeous hostess while eating lunch at a restaurant in Los Angeles.

Like we said, we can’t say 100% he was flirting. Heck, maybe he was trying hook one of his boys up. But still, I wouldn’t like these photos if I were Iggy. I think marriage would be a huge mistake for both of them.

Hopefully they realize this before they add to the growing pile of Hollywood divorces.