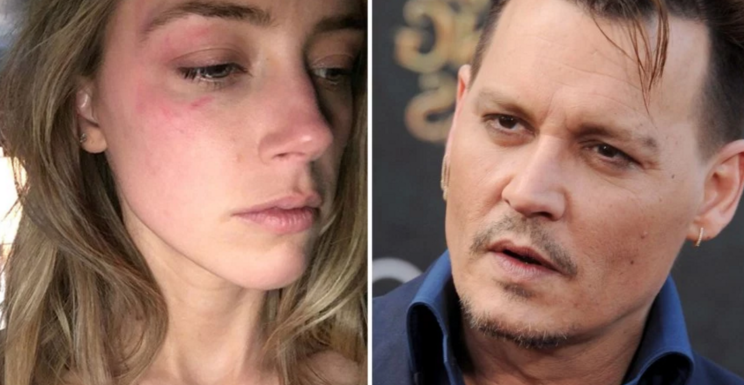 Amber Heard And Johnny Depp’s Divorce Is Getting Nasty…And Possibly Violent? Get The Crazy Details Inside! Damn. The drama between Johnny Depp and Amber Heard is heating up faster than a Hot Pocket. When the couple announced their divorce earlier this month, we all thought it was your standard Hollywood divorce: they got bored with each other and decided it was time to move on.

But now we are learning their relationship was toxic, and possibly filled with verbal and physical abuse. The story is a complicated one, so give us a minute to explain everything that has been happening. A few days ago, Heard was granted a domestic violence restraining order against Depp after she claimed in court that he threw an iPhone at her face during a fight the previous week.

As you can see in the photo, she does have a mark below her eye… In court documents obtained by E! News, the 30-year-old actress claimed her marriage to Depp was filled with abuse, “I endured excessive emotional, verbal and physical abuse from Johnny, which has included angry hostile, humiliating and threatening assaults to me whenever I questioned his authority or disagreed with him.”

As for why she waited so long to speak out? Well, she believed things would get better. She was hoping things would calm down. They didn’t though, and she felt like it was time to give herself the protection she deserves.

BUT WAIT…THERE IS ANOTHER SIDE TO THIS STORY!

Obviously, the report above doesn’t exactly paint the best picture of Depp. In fact, if it’s true, his career in Hollywood might be over.

And some people believe that’s exactly what Heard is trying to do. She’s trying to dramatize things and ruin Depp’s life by spreading false accusations against him. According to TMZ, the cops that were called out to the scene during the alleged iPhone incident claim they saw no signs of injury on Heard’s face.

In addition to that, Heard told them that it was just a “simple argument” with her husband. She made no hints that he abused her. Of course, that doesn’t mean an assault didn’t happen. She might have been too afraid to say anything at the time.

However, the story doesn’t end there. TMZ claims there were two security guards standing in the “entryway inside Johnny and Amber’s apartment unit, giving them space during the argument, when out of nowhere they heard Amber scream.”

They rushed inside the living room and saw Depp standing at least 15-20 feet away from her. These same guards are expected to testify next month during the restraining order trial, and it looks like they’re going to be defending Depp.

Because according to them, Heard was the one constantly losing her sh-t during the marriage. She would scream at Depp and throw things at him during their arguments. They also claim they’ve had to pull her off Depp several times throughout their relationship.

It’s a pretty crazy story. As always, we’ll keep you posted. But for now, who do you believe?