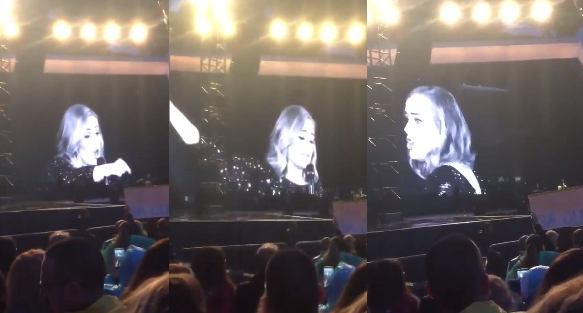 WATCH: Adele Calls Out Fan During Concert For Filming Her And She Looked Genuinely Pissed! People are praising Adele today after she called out a fan for filming her during a concert in Verona, Italy, this past Sunday. The funny thing about this whole thing is that we only know about this because another fan was filming the incident on their phone.

It appears the woman who Adele called out was only targeted because she actually had a tripod set up. The 28-year-old singer noticed it and decided to shame her in front of everyone.

Check out the awkward moment below. Adele’s face at the end….she was not happy!

And while most websites are supporting Adele’s reaction, I just can’t get on that train. You can’t single out one fan just because they were more professional with their recording. This moment was captured from at least five different angles.

Why? BECAUSE EVERYONE FILMS DURING A CONCERT! You can’t stop it. Is it a little annoying? Sure, but it’s just something that happens now. They still paid money to come see you. If they want to film your set, so they can enjoy it for years to come, what’s the big deal?

In any event, she will be kicking off the North American portion of her tour on July 5 in Minnesota. We suggest you leave the tripod at home. Film the entire concert on your phone like a normal person.