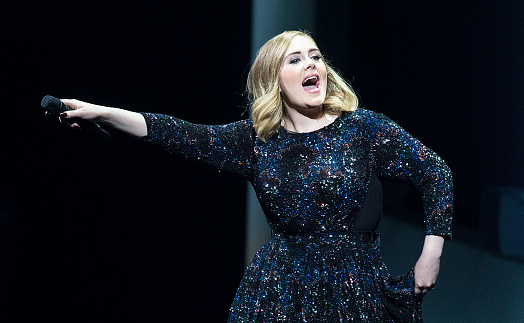 When you’re one of the most successful singers in the world at just 28-years-old, and literally every song you release becomes a smash hit, you can do and say pretty much anything you want. Adele knows this, and she’s not holding back on her 25 World Tour.

As some of you may remember, last month Adele got upset on stage when she noticed a fan filming during her concert. You can check out video of that incident by clicking this link.

And during one of her most recent concerts, Adele fired back at 72-year-old music producer Tony Visconti. In an interview with The Daily Star, Visconti talked about where the music industry was going. He expressed disappointment with how “perfect” everyone sounds, and he got personal when he brought up Adele’s name.

You turn the radio on and it’s fluff, you are listening to 90 percent computerized voices. We know Adele has a great voice but it’s even questionable if that is actually her voice or how much has been manipulated. We don’t know.

Well, it looks like we do know now. Adele apparently read those comments and she has a pretty simple message for Visconti.

If you can’t understand exactly what she’s saying because of the idiots that sound like characters from The Sims when they accidentally burn their food in the kitchen, she says, “Some d–khead…tried to say that my voice wasn’t me on record. Dude, suck my d–k.”

That’s certainly one way to respond. It looks like the insult worked too, because Visconti apologized to Adele the other day and explained he wasn’t trying to insult Adele.

If Adele has taken my comments as offensive that was certainly not my intent. Adele has a great voice and it brings pleasure to millions.

Looks like Visconti is good now. He won’t be forced to get on his knees. Adele’s d–k will remain dry for a little while longer.