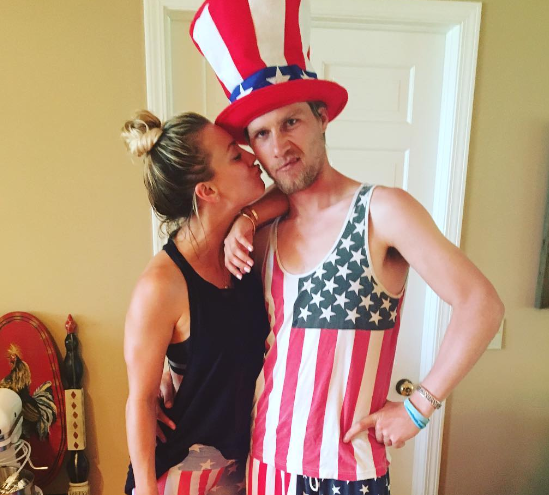 Kaley Cuoco Posts Photo Of Her Dogs Sitting On U.S. Flag, Internet Freaks Out And Makes Her Delete The Photo

Kaley Cuoco was trying her best to spread some Independence Day love earlier this week when she posted the adorable photo you see above. As you can see, her dogs were kickin’ it with flag-themed bandanas while sitting on top of an American flag.

And since most Americans believe the flag actually has feelings, they freaked out and started calling Kaley all sorts of nasty things for “disrespecting” their country. As you can see, one user in the image above wrote, “This is simply disrespectful. That’s a flag. A symbol of what people have sacrificed.”

It’s a piece of material. You could wipe your butt with the flag and it still wouldn’t be disrespectful. If anything, you’d “simply” be resourceful. The rules surrounding our flag are more complicated than instructions from IKEA. It’s like taking care of a freaking Mogwai: no other flag can fly higher than the national flag, if a flag stays up throughout the night it must be illuminated, don’t feed it after midnight, don’t get it wet, etc.

It all means nothing, but Cuoco was receiving so much hate from sensitive Americans that she decided to delete the adorable photo and post a long apology on her Instagram account. How dramatic. Almost as dramatic as the people who still believe you must burn the flag when it touches the ground. I mean, how far do people really take that? What if some drunk redneck tripped over a tire in his yard while wearing a flag t-shirt? Does he have to burn the t-shirt? And is he allowed to take it off first? Or must he burn with it?

I don’t know, but these are questions that need to be answered. Also, you know someone out there has American flag underwear. What happens if they shart while wearing them? They would literally be shi**ing on the flag. The punishment for that must be death, right?