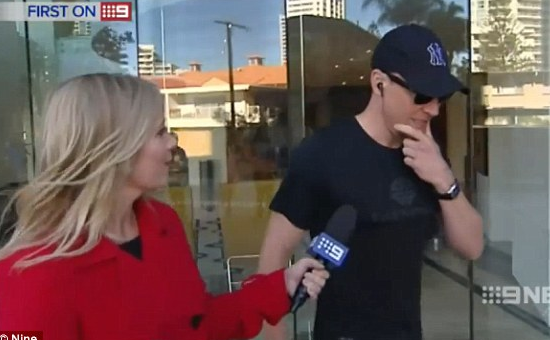 We have seen multiple photos of Taylor Swift and Tom Hiddleston together. They have basically been together 24/7 for the past month. Swift even met Hiddleston’s family, and Tom was introduced to T-Swift’s squad, which is obviously more important than her family.

It’s clear things are getting pretty serious, but neither Swift or Hiddleston have talked about the fresh relationship publicly. And that’s understandable considering the 26-year-old singer most likely cheated on Calvin Harris with Hiddleston.

But this past weekend, a reporter down in Australia was able to catch Hiddleston before his morning run on the beach, and when the reporter asked about T-Swift…things got a little awkward.

For those who can’t watch the video right now, let me give you a quick play-by-play.

Hiddleston laughs awkwardly, thinks about running away, and then says...

Hiddleston: Um, I..uh. I’m not going to answer that, if that’s all right.

Reporter: Well, what are you and your girlfriend looking forward to doing?

Hiddleston: I don’t know. Um…it’s just good to be back.

It was like watching a curious mother ask her son about his new girlfriend. Hiddleston was one awkward question away from running back to his bedroom and locking the door until dinner.

In any event, this #Hiddleswift romance is moving fast. Sources close to Swift claim she’s already thinking about marriage and kids. She believes Hiddleston would be a wonderful father, and apparently having children together is something they have already discussed.

This is the kind of a man she would want to marry. She has said he would make a great dad. They have talked about what they want in the future and kids are something that they would both like down the line. They have very real and serious conversations about life.

Of course we must remember that you can’t always trust these sources. For all we know, this is some sick game Swift and Hiddleston are playing with the media. We could be in a documentary right now, “How To Make The Media Your Bitch”

One thing is for sure, Tom might want to be more discreet with his staring…