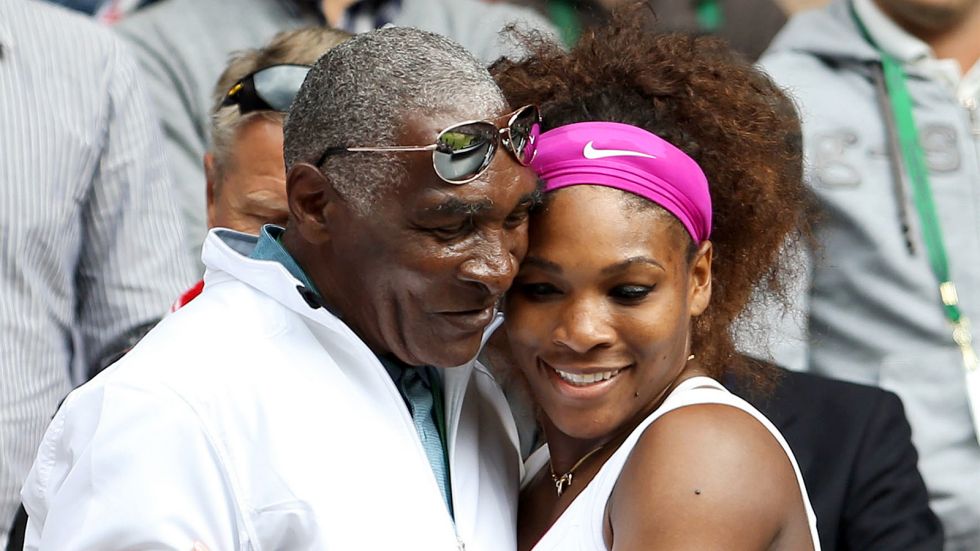 JUST REVEALED! Father of Serena and Venus Williams Had a Serious Stroke While Daughters Were Competing & Winning at Wimbledon. It was revealed this week that the Patriarch of the Williams family suffered from a serious stroke just days before his daughters’ historic wins.   Richard Williams, the man responsible for the early development of the dynamic duo is now 74.  When the news broke of his stroke, his third wife, 37 year old Lakeisha Williams told the press….

WAIT A FREAKIN MINUTE!  37 YEARS OLD.  CAT DADDY!!  #mrstealyourgrandma!  Let’s take a look at this Lakeisha shall we? You didn’t just think I was going to glance by that detail did you? A 37 year old age difference is huge.  Richard has been alive twice as long as his wife.

For those who don’t know, Richard Williams has bank.  He is worth an estimated $20 million, so you can imagine that kind of scratch can bring the THOTS running from every direction. Back in 2011, Lakeisha Williams was Lakeisha Graham.  She was just 32 years old and Williams was 69 and they secretly got married.  In case you were wondering, Lakeisha is just 2 years older than Venus.

To Lakeisha’s credit, she appears to be a loving supportive wife – pictured below with Richard. There are no reports of scandals, abuse, or photos of her hanging out with other celebrities. Richard divorced from Serena and Venus’ mom Oracene Williams back in 2002 among allegations of domestic violence.  (Oracene had three broken ribs back in 1999 allegedly from the hands of her husband).

FIRST COMES, MARRIAGE THEN COMES THE BABY IN THE BABY CARRIAGE LaKiesha is no slouch.  She knew that getting married was the first part, but getting pregnant would really set her for life. Mission Accomplished.  Richard and Lakeisha had a baby just a few years later.  At age 71 Richard Williams got the boy he always wanted.  Lakeisha Williams gave birth to Serena and Venus’ half-brother, Dylan Starr Richard Williams.

OK – BACK TO THE STROKE.  AT LEAST IT APPEARS LAKEISHA IS THERE CARING FOR HER MAN.

LaKiesha told the press that Richard doesn’t remember the stroke, he’s resisting therapy and won’t go back to the hospital.  She stated,

His mind is telling him that since he was once in charge of his life, after what’s happened he’s not accepting it. His condition is fair – he’s up and walking around but he’s not at 100 per cent.  He needs speech therapy, psychological therapy and physical therapy but for now he refused.

His mind is thinking that they’re going to put him back in “prison”, which is what he calls the hospital.

Wow!  A stroke is serious stuff! With their father in the hospital, the Williams sisters went on to win big time.  Venus and Serena won  their sixth Wimbledon doubles championship (they are 14-0 in doubles finals).  Serena’s win was her  7th Wimbledon title giving her 22 Grand Slams tying Steffi Graf for the most.  Graf retired at age 30.  Williams since turning 30 has won 9 majors; the most in the Open era and 6 more than each of the women in 2nd place.

It was a very difficult tournament for Serena who failed to win the finals  at the Australian Open and the French Open earlier this year.  Maybe playing for her father was the extra motivation she needed, although we highly doubt she needs anymore.

She is now going after Margaret Court’s record of 24 titles.  Court was on hand to see number 22.  Serena fans think she has two or three more wins in her and so does she.  Serena says,

I expect to win every time I step out on the court; anything less is unacceptable for me.  And I think that’s just rare and it’s different, but it’s me, and it’s why I have 22 Grand Slam titles.

Let’s hope that Richard’s health recovers so he’s around to see the day she holds up trophy number 25. Our thoughts are with Williams and his family in hopes for a speedy recovery.

Both Venus and Serena will be heading to Rio de Janeiro in a few weeks to compete in the 2016 Olympic games.  We will be watching.