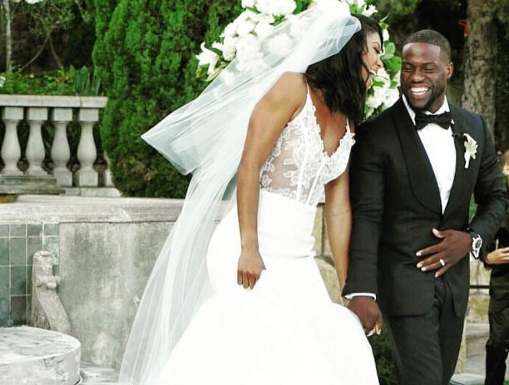 Kevin Hart Marries Eniko Parrish, Shares Absolutely Beautiful Photos From The Wedding — Check Them Out Inside! Has Kevin Hart finally found the one? It looks like it. The 37-year-old comedian/actor couldn’t make things work with the mother of his two children, Torrei Hart. They got divorced back in 2011 after eight years of marriage.

But now Kevin has reportedly found the love of his life and her name is Eniko Parrish. They first met seven years ago and spent several years in the “boyfriend/girlfriend” zone before Kevin popped the question in August of 2014 on Eniko’s 30th birthday.

Fast forward two years later, and they are now officially married. They tied the knot in a beautiful ceremony in Santa Barbara, California, on August 13. Sources say there were around 200 people at the wedding, including Hart’s two kids.

His 8-year-old Hendrix reportedly served as the best man. Hart shared photos from the wedding on his Instagram account, and if you compare these stunning shots with the photos from your own wedding…well you made a huge mistake.

It ain’t easy (or cheap) being this flawless… Earlier this week, Hart talked with Us Weekly about his new wife. He said after seven years of being together and two years of being engaged, it was time…

I honestly can say that I’m lucky enough to have an amazing woman. I’m looking forward to getting married. We got seven years under our belt, been engaged for two. It’s time.

We wish them all the happiness in the world. By the way, if you want to see how this all started, check out the video below. The special “she said yes!” moment was caught on camera. Multiple cameras. Everyone in that place had their phones out.