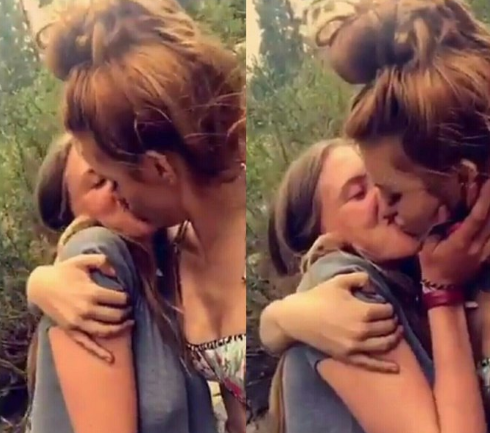 Bella Thorne Comes Out As Bisexual And Is Now Dating Her Brother’s Ex-Girlfriend, We Got Photos And Video Inside Of The New Couple

You might have heard the news yesterday. Bella Thorne revealed she was bisexual on her Twitter account in the most nonchalant way possible. A fan asked her if she was bisexual after Thorne posted a Snapchat clip of her kissing another girl, and Thorne simply replied with, “Yes.”

After the tweet was spread around on Twitter, Thorne noticed all the positive messages she was receiving from her fans, so she decided to thank them directly.

That’s great and all, but it’s not the real story here. The most interesting thing about this situation is the fact that the former Disney Channel star is now dating her brother’s ex-girlfriend.

And honestly, they were probably secretly dating long before now. This girl is named Bella Pendergast, and they have known each other since 2011, when Pendergast started dating Thorne’s brother. They became best friends, and at some point during this friendship, they discovered they had romantic feelings for each other.

It’s impossible to know when that moment happened, but the timing of all this is really interesting. It appears they both broke up with their boyfriends at around the same time. As most of you know, Thorne had been dating Gregg Sulkin for a little over a year. They started dating in June of 2015 and seemed extremely happy together. When their relationship was still fresh, the 18-year-old actress told Us Weekly the following, “He’s one of the most amazing people I’ve ever met. He’s so kind, so sweet. He’s very caring even when he doesn’t need to be.”

They announced their split earlier this month, but their relationship was probably over well before then. Bella and Bella #2 have been posting flirty messages back and forth on social media for a few months now.

Looking at the tweets now, it’s pretty obvious. What an interesting little love story they have. The only acceptable ending is if Gregg Sulkin starts dating Bella’s brother.