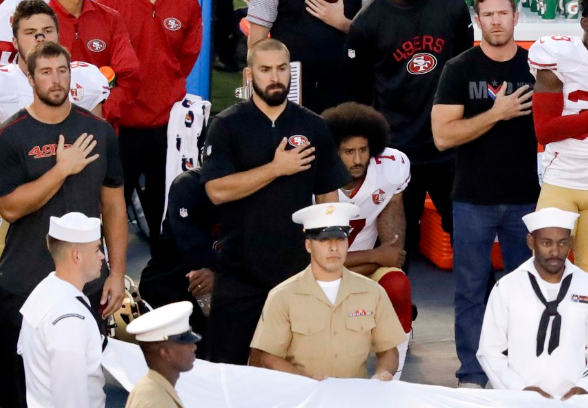 Colin Kaepernick Takes A Knee During Anthem, And Then Donates $1 Million To Help Communities In Need! (VIDEO)

You have probably heard all about the Colin Kaepernick drama by now. Almost the entire NFL community turned on him because he refused to stand during the national anthem last Friday night. He explained to the media that he can’t fake his pride, “I am not going to stand up to show pride in a flag for a country that oppresses black people and people of color.”

This upset millions of patriotic football fans across the country. Some people even wanted the NFL to kick him out of the league…FOR NOT STANDING DURING THE NATIONAL ANTHEM! Do people not realize how ridiculous that is? As if standing is the ultimate sign of respect. Standing during the national anthem makes you a better American.

No. Standing up (or sitting down) and criticizing the country when it deserves to be criticized makes you a great American. Closing your eyes and pretending like we live in the greatest country in the world just because we’re “free” doesn’t make you a great citizen.

So, I support Mr. Kaepernick, and I’m happy to see he didn’t back down this week. During the game between the Chargers and 49ers, the 28-year-old QB refused to stand during the national anthem once again. This was a particularly brave move considering it was Salute to the Military Night.

He did change up things a bit though. Instead of sitting down completely, he decided to take a knee. He reportedly talked with a military vet before the game and was told taking a knee was more respectful than sitting.

We were talking to him about, ‘How can we get the message back on track? And not take away from the military? … But keep the focus on what the issues really are.’ As we talked about it, we came up with taking a knee, because there are issues that still need to be addressed. And it was also a way to try to show more respect to the men and women that fight for this country.

Of course, he was still booed every single time he took the field. Kaepernick isn’t paying attention to the boos though. He’s too busy fighting for change. He announced that he will be donating $1 million to charities helping communities in need.

NOW WATCH HIM KILL THE PRESS DURING THE POST GAME CONFERENCE