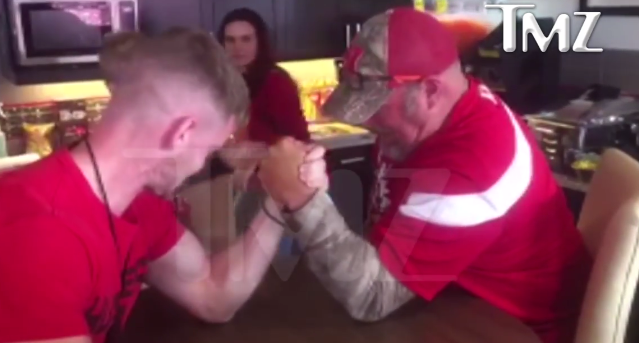 WHAT THE FUDGE: Disturbing Video Shows Larry The Cable Guy Snapping A Dude’s Arm…Watch If You Dare (VIDEO)

Larry the Cable Guy is a comedian. An extremely successful and wealthy comedian. He has found his audience (rednecks who are always down for fart jokes) and squeezed every last dime out of them. To some people, stand-up comedy is an art form, but to Larry it’s simply a business.

During the game, an army vet named John who was watching the game with Larry, challenged the comedian to an arm wrestling match.

Sounds like something you expect to happen at a football game, right? Just a bunch of dudes doing dude-like things. And as you can see in the video below, it was a close competition. You’d think the army vet would crush Larry, but that wasn’t the case.

In fact, Larry ended up crushing the army vet. Literally. He nearly snapped his arm in half. You have to watch the video. It’s insane.

John had to be rushed to the hospital. He had surgery to put a plate in his arm. This is a photo of his arm after the surgery…