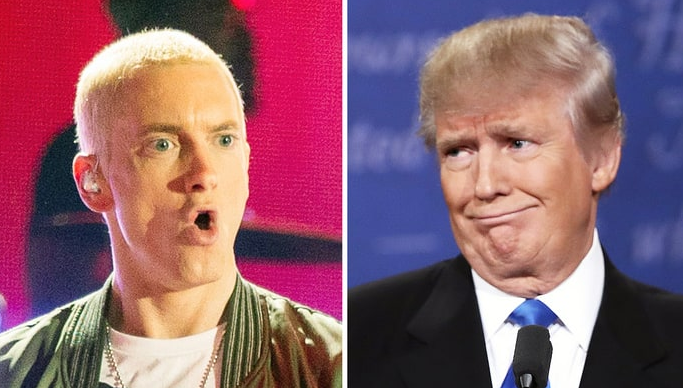 He’s baaack. And this time he’s not going after Mariah Carey or Nick Cannon. Eminem is going after someone with a little more power this time. The 44-year-old rapper hasn’t been around much lately, but he put himself right back in the game on Wednesday.

In the track titled “Campaign Speech” Eminem goes in hard on Donald Trump and his supporters. He also references David Hasselhoff, Trayvon Martin and Colin Kaepernick. The nearly eight-minute assault is classic Eminem, and he teased his fans by announcing he’s also working on an album, “Don’t worry I’m working on an album! Here’s something meanwhile.”

The beat is simple. All the attention is focused on the lyrics, which include great lines like:

“You say Trump don’t kiss ass like a puppet? / ‘Cause he runs his campaign with his own cash for the funding? / And that’s what you wanted? / A f–kin’ loose cannon who’s blunt with his hand on the button? / Who doesn’t have to answer to no one? Great idea!”

And then this is where classic Slim comes in with one-liners, “stegosaurus, Chuck Norris with a thesaurus,” and “Robin Thicke with a throbbin’ dick.”

The attack might not surprise some of you, but we have to imagine Trump was a little hurt. Back in 2004, Eminem threw a party to promote his new album, and Trump stopped by to praise the rapper…

“I’m Donald Trump, I’m always right. I know a winner when I see one, and Donald Trump is telling you right now, Slim Shady is a winner. He’s got brains, he’s got guts, and he’s got Donald Trump’s vote!”

Yeah, but you don’t have Eminem’s vote.