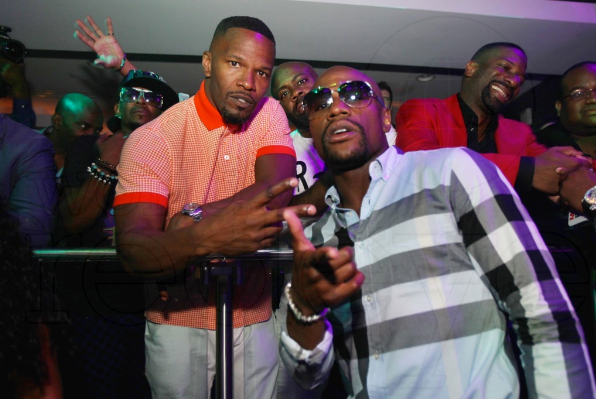 When you are retired at age 39 with millions in your bank…what the fudge are you supposed to do? Play golf? Read? Take long walks? Travel? Those are all options, but those options aren’t exciting enough for Floyd Mayweather.

He wants a real challenge, and he’s going to get it, thanks to his friend Jamie Foxx. The 48-year-old actor/filmmaker is working on a new movie titled, “All-Star Weekend” and Floyd has been invited to join the project. According to TMZ, he will be playing himself in the movie, but that doesn’t mean he’s taking this role lightly.

Sources say he’s putting all his energy into this role because he doesn’t want to let Foxx down. The movie is about “two buddies who form a rivalry over their favorite American basketball player.”

That’s all IMDb has to offer on the project, but we did some digging and found this interview Foxx had with BET way back in 2012. In the interview, he talks about this project and explains the two leads were going to be Kevin Hart and Ken Jeong…

“I got a film I want to direct, it’s called All Star Weekend. It’s about two guys, one guy loves Kobe Bryant, the other guy loves LeBron James. When you talk about LeBron and Kobe, it’s like talking about Republican and Democrat. It is all the way out there funny. I’ve talked to Kevin Hart, and I’ve talked to Ken Jeong from The Hangover. I would probably make a cameo in it. Hopefully we’ll get that going really soon.”

Obviously he didn’t get that going “really soon,” but it looks like it’s back on the table now. We’re not sure if it’s still focused on LeBron and Kobe. It doesn’t seem like it would work now that Kobe is retired.

We’ll keep you posted on this project.