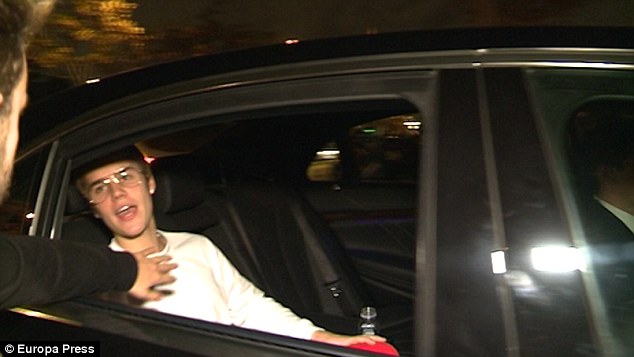 Only when Justin has to throw hands do the worlds of Justin Bieber fans and Floyd Mayweather fans cross.  That’s mainly because of the numerous times that Floyd has walked into the ring with Justin by his side.  We also know in the past that Justin has actually taken boxing lessons from Floyd.

I’m not sure how the two hooked up, but the relationship and training appears to be paying off again.

NO, JUSTIN IS NOT LOSING IT!

Before everyone starts saying that Justin is losing it, because that’s always what we say, I think this fan not only deserved it, but Justin’s security detail should have done the heavy lifting here, instead of Justin having to do it himself.  I’m team Bieber all the way with this one.

The entire thing happened as Justin was arriving for a concert at the Pala Sant Jordi Stadium in Barcelona.  He was in the back of a chauffer driven car when he rolled down the window to address fans.

This one fan, approaches the window and then sticks half his body through the window and proceeds to run down the street with the car.  Although you can’t hear what Justin is saying, I can only imagine it’s something like “Back up Bro”.

And then Justin hit him with that Popeyes!  That one piece!

It didn’t look like the punch had too much power behind it, until the fan emerged and showed the crowd his bloodied up face.  Damn Daniel!  Watch the hit.