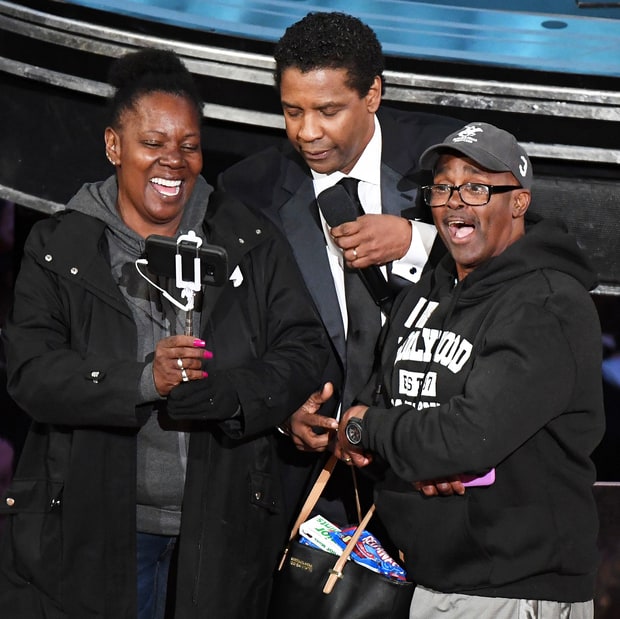 Remember ‘Gary From Chicago’ From The Oscars? He Had Just Completed A 20-Year Prison Sentence 3 Days Before The Show!

For all you people out there thinking the tour bus skit at the Oscars was fake, you might want to think again. If you didn’t watch all four hours of the show, allow us to explain what happened.

Jimmy Kimmel surprised a group of people on your typical Hollywood tour bus by bringing them inside the Oscars and letting them shake hands with their favorite celebs. And I’ll admit, I was one of those people saying sh*t like, “Oh, you know they screened these people! They’re probably all family!”

But no, these were real people who had no idea they were about to be on national television in front of millions of people.

How do we know this? Well, one of the most memorable people from the group was a guy named Gary Coe…from Chicago. He was on the tour bus with his fiancee Vickie Vines. They were not afraid to ask the celebs for photos, shake their hands, hugs, etc. And while being interviewed by Kimmel, Gary revealed he and Vickie were recently engaged. Vickie’s favorite actor, Denzel Washington, “married” them live on television. It was a special moment, and it was fun to see the celebs interact with ~normal~ people.

Anyway, back to this Gary dude. After he went viral, the media did a little digging and discovered Gary had just finished serving a 20-year prison sentence three days before the Oscars.

He told ABC 7 Chicago that he found religion and his finacee while in prison, and now he’s a changed man.

“Change is possible. It’s a sad day to be in prison for 20 years and not be able to be a dad, granddad to your children. You know what my son told me today, man, and I almost come to tears. He said he’s proud of me. So, to hear [my] children say that they’re proud of me means the world to me.”

We don’t know what his exact crime was. He just said he had “multiple felonies,” and that’s okay because we don’t need to know all the details.

They don’t matter. The dude served his time, and now he’s trying to live a better life. We’re all on your side, Gary.